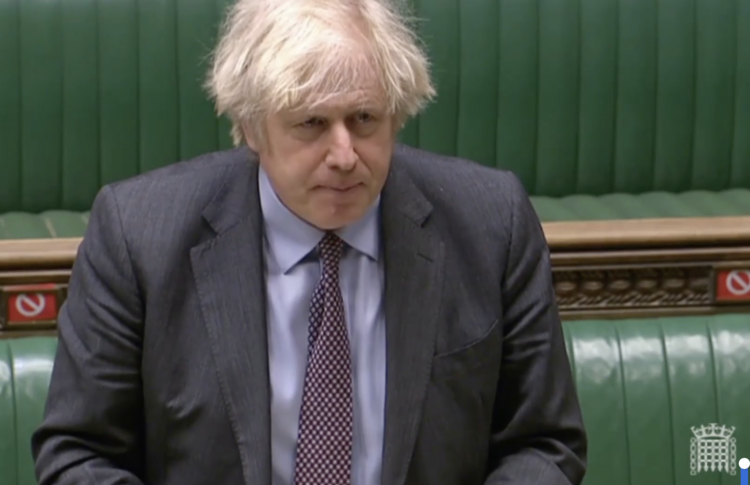 Prime Minister, Boris Johnson, announced a cautious one way to freedom road map for the end to the UK’s third  national lockdown, as he outlined the phases in which lockdown will be eased.

In a carefully worded speech, Johnson said we cannot persist indefinitely with restrictions that debilitate our economy, our physical and mental well-being, and the life-chances of our children, he said.

While warning it is so crucial that this roadmap should be ”cautious but also irreversible”, he said there is no credible route to a Zero Covid Britain or indeed Zero Covid world.

Johnson announced the opening of all schools from March 8th, as the first in the easing process  of the lockdown, as he set out the stages and conditions in which Brits will be free to return to their lives as they know it.

The prime minister emphasised the integral role data will play in guiding the British public cautiously down the road to freedom.

Speaking of a one way road to freedom, the prime minister hailed the success of the top four priority groups being offered a vaccine by the middle of February, and said now the aim was to offer a first dose to all those in groups 5 to 9 by 15 April, and  offer a first dose to every adult by the end of July.

Johnson said the data so far suggests the efficacy of both vaccines against the dominant strains of Covid., as he praised the Nhs for its efforts in vaccinating 17.5 m people.

While  crediting the Oxford-AstraZeneca vaccine for providing a good level of protection,   he added caution by noting that ”since we only started deploying this vaccine last month, at this stage the size of its effect is less certain.’

Johnson announced that two weeks’ from today pupils and students in all schools and further education settings can safely return to face-to-face teaching. He said it will  be supported by twice-weekly testing of secondary school and college pupils.

Breakfast And School Clubs To Open

Among a list of  lockdown prohibitions lifted as part of his four phased lockdown easing road map, the prime minister  announced that breakfast and afterschool clubs can also re-open. Other children’s activities, including sport, can restart where necessary to help parents to work, Johnson said.

In addition, from 8 March, people will also be able to meet one person from outside their household for outdoor recreation – such as a coffee on a bench or a picnic in a park – in addition to exercise.

Johnson’s four-step plan will culminate in all legal limits on social contact lifted by 21 June, starting with the re-opening of all schools on March 8 months.

The prime minister presented a responsible and cautious message, offering a realistic hope to brighter days ahead,  cautioning at the same time the fundamental requirements necessary to achieve that outcome.

With vaccination success, controlled infection rates,  and no emergence of a new strain, Johnson says it will be back to the night clubs for party goers by June, with plans put in place to make them Covid free. However, he said he would be mindful of all the issues that could arise in relation to discrimination

Emphasising a continued substantial threat  Johnson said the numbers in hospital were only now beginning to fall below the peak of the first wave in April.

‘The sequence will be driven by the evidence, so outdoor activity will be prioritised as the best way to restore freedoms while minimising the risk.

Decisions at every stage will be led by the data, he said.  The vaccine program will have to be continuous , as evidence shows vaccines are sufficiently effective in reducing hospitalisations and deaths, he said.

While  crediting the Oxford-AstraZeneca vaccine for providing a good level of protection,   he added caution by noting that ”since we only started deploying this vaccine last month, at this stage the size of its effect is less certain.