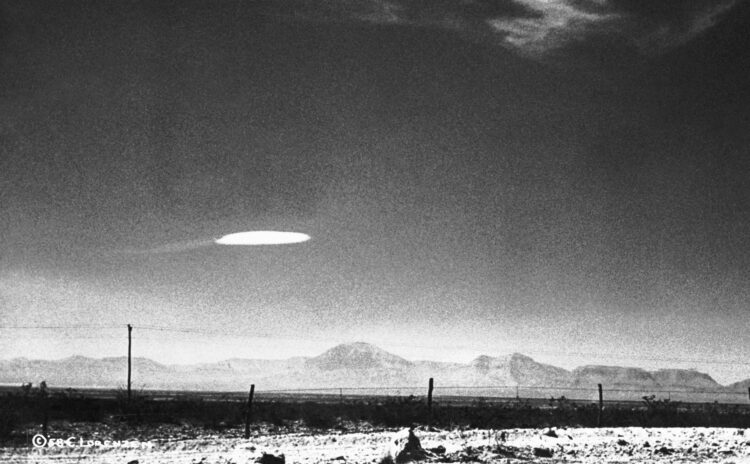 The U.S government will hold its first public  hearing on Ufos , after years of attempts by avid Ufo enthusiasts to bring the topic to the fore.

The US House Intelligence Committee’s Counterterrorism, Counterintelligence, and Counterproliferation Subcommittee will  examine the subject of UFOs, with a sharp focus on a high-profile report released last year into ‘unidentified aerial phenomena’ or UAPs.

It will focus on a Pentagon program that was established last year after the US intelligence community released a preliminary assessment on 144 reports of “unidentified aerial phenomena” since 2004 — and could explain only one.

Ronald Moultrie, the Pentagon’s top intelligence official, and Scott Bray, the deputy director of naval intelligence, will testify before the panel.

Traditionally, these kinds of things have always been discussed behind closed doors. But, for the first time in 50 years, the public will be able to witness the hearings. in what will be a major turning point on a topic that has both divided America for decades, and caused a stir in many circles.

The Eye Of Media.Com will be present during the discussion.

‘The American people expect and deserve their leaders in government and intelligence to seriously evaluate and respond to any potential national security risks — especially those we do not fully understand,’ the panel chair, Rep. André Carson, said in a statement on Tuesday.

There was a huge amount of hype around the 2021 report into UFO sightings. But, when it arrived, it stated the data was ‘largely inconclusive’.

Newly leaked video confirmed as real by the Pentagon shows UFO buzz a US stealth ship and dive under the water.

The detailed  9-page report reviewed 120 incidents recorded by US military but the government didn’t confirm anything about UFOs other than they might be airborne clutter, natural atmospheric phenomena or aerial crafts from adversaries like China or Russia.

The report was the first time the American government  admitted the presence of things in the sky beyond its explanation.

The stated purpose of the report was to submit an intelligence assessment of the threat posed by unidentified aerial phenomena (UAP) and the progress the Department of Defense Unidentified Aerial Phenomena Task Force (UAPTF) has made in understanding this threat.

Also stated in the dossier was that ”this report provides an overview for policymakers of the challenges associated with characterizing the potential threat posed by UAP while also providing a means to develop relevant processes, policies, technologies, and training for the U.S. military and other U.S. Government (USG) personnel if and when they encounter UAP, so as to enhance the Intelligence Community’s (IC) ability to understand the threat”.

The report continued:  ”Some UAP appeared to remain stationary in winds aloft, move against the wind, maneuver abruptly, or move at considerable speed, without discernable means of propulsion. In a small number of cases, military aircraft systems processed radio frequency (RF) energy associated with UAP sightings

‘Our analysis of the data supports the construct that if and when individual UAP incidents are resolved they will fall into one of five potential explanatory categories: airborne clutter, natural atmospheric phenomena, USG or U.S. industry developmental programs, foreign adversary systems, and a catchall ‘other’ bin.’

‘With the exception of the one instance where we determined with high confidence that the reported UAP was airborne clutter, specifically a deflating balloon, we currently lack sufficient information in our dataset to attribute incidents to specific explanations.’

‘Although most of the UAP described in our dataset probably remain unidentified due to limited data or challenges to collection processing or analysis, we may require additional scientific knowledge to successfully collect on, analyze and characterize some of them.’

It was named the Airborne Object Identification and Management Synchronization Group and instructed to look at reports of UAPs near US military facilities.

The group is overseen by the Under Secretary Of Defense for Intelligence, the director of the Joint Staff and officials from the Office of the Director of National Intelligence.

‘Incursions by any airborne object into our SUA (Special Use Airspace) pose safety of flight and operations security concerns, and may pose national security challenges,’ the Pentagon stated

Representative Adam Schiff, who chairs the House Intelligence Committee, said the purpose of next week’s hearing was to shed light on ‘one of the great mysteries of our time and to break the cycle of excessive secrecy and speculation with truth and transparency.’

There have been multiple studies and evaluations of Ufos conducted by professional experts and enthusiasts over the decades, giving their perspective of the mysterious objects based on the many facts known about them.

Some members of this publication joined forces in 2019 with  a number of researchers studying the phenomenon to swap findings and ideas, at the same time forming independent conclusions based on available evidence so far.