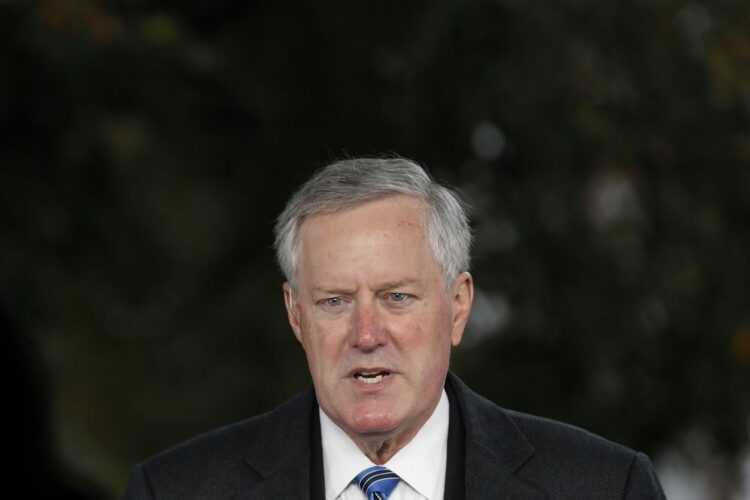 Former Trump White House chief of staff Mark Meadows and other top aides subpoenaed by the House select committee investigating the Capitol attack are being directed to defy orders for documents and testimony related to 6 January, according to reliable sources.

All four Trump aides contacted by the select committee – Meadows, deputy chief of staff Dan Scavino, strategist Steve Bannon, and defence department aide Kash Patel – are set to resist the subpoenas under the instructions of Donald Trump, according to sources, because Trump is preparing to direct them to do so, the source said.

The select committee that issued the subpoenas have threatened to pursue criminal prosecutions if the order is not met with compliance.

Former president, Donald Trump was impeached after inciting the insurrection at Capitol Hill on January 6 this year. He told protesters that the 2020 elections had been rigged, and further told them that Mike Pence did not have the courage to do the right thing.

Angry protesters then stormed the Congress, smashing up the place as they attempted to disrupt the final vote counting to certify the results of the elections, which mae Joe Biden the new president of the United States Of America.

The plans to defy the orders is being premised on executive privilege, according to sources, who say Trump believes confidential engagements by a sitting president of the United States is protected, and should remain secret.

House select committee investigators have demanded that the four Trump aides turn over emails, call records, and other documents related to the Capitol attack by Thursday and then appear before the panel for closed-door depositions next week.

The insurrection on Capitol Hill occurred after Trump incited a mob to fight for their country, stating that they wouldn’t have a country anymore

House select committee chairman Bennie Thompson told reporters recently that he was prepared to pursue criminal referrals to witnesses who defied subpoenas and subpoena deadlines, as the panel escalates the pace of its evidence-gathering part of its investigation.

“We’ll do whatever the law allows us to do,” Thompson said last Friday on the subject of prosecuting recalcitrant witnesses. “For those who don’t agree to come in voluntarily, we’ll do criminal referrals.”

A spokesperson for the select committee declined to comment about how the panel intended to secure compliance.

The legal battle to force some of Trump’s most senior White House aides to comply with the subpoenas – however it is manifested – is likely to lead to constitutional clashes in court that would test the power of Congress’s oversight authority over the executive branch.

But members of the select committee in recent days have expressed quiet optimism at least about the potential prosecution of witnesses who might defy subpoenas, in part because of the Biden administration’s public support for the investigation.

The select committee said in the subpoena letters to Meadows, Bannon, Scavino and Patel that they were key persons of interest over what they knew about the extent of Trump’s involvement in the Capitol attack, which left five dead and more than 140 injured.

Meadows, the former White House chief of staff, ia of special interest to House select committee investigators since he was involved in efforts to subvert the results of the 2020 election and remained by Trump’s side as rioters stormed the Capitol in his name.

He was also in contact with Patel over at the defense department, the select committee asserted, and communicated with members of the Women for America First group that planned the ‘Stop the Steal’ rally that deteriorated into the 6 January insurrection.

Scavino, the former White House deputy chief of staff, became a person of interest after it emerged that he met with Trump the day before the Capitol attack to discuss how to persuade members of Congress not to certify the election, according to his subpoena letter.

The select committee said in the subpoena letter to Bannon that they wanted to hear from Trump’s former chief strategist, who was present at the Willard Hotel on 5 January to strategize with Trump campaign officials how to stop the election certification.