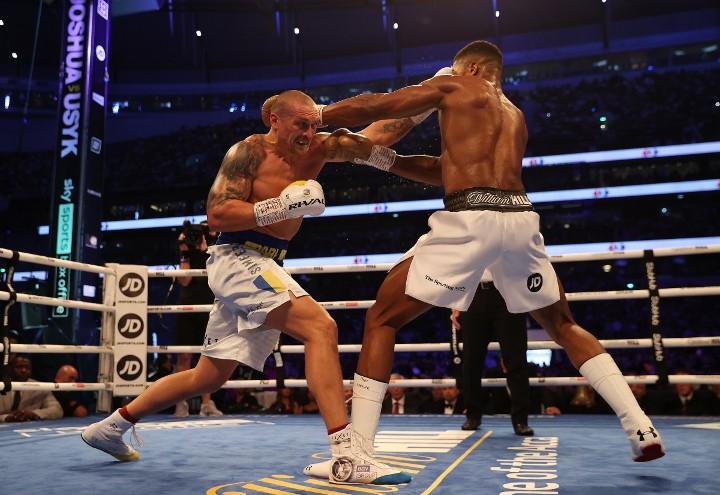 Anthony Joshua let down his legion of British fans with a disappointing performance that saw former cruiser weight champion and two time Olympic gold medalist Usyk, outclass the former world heavyweight champion in a 12 round championship  showdown in London on Saturday.

Usyk, who gave away over a stonne and a half to Joshua,  comfortably outpointed the Londoner, nearly stopping him in the final round of a fight the Ukranian  dominated most of the night. The Londoner came in at his lowest weight of 17 stone 2 to maximise speed combined with explosive power, against the mobile and talent Usyk, who came in at 15 stone 8 inches.

Disappointingly,  no explosion was forthcoming from Joshua, who lacked any sense of urgency or conviction in his artillery, and looked nothing like the true champion he purports to be with a future legacy in mind.  The interest in a unification clash with Fury has almost dissipated , with many fight fans and analysts considering even the thought of such a monumental clash futile. Not may people will give Joshua a fighting chance against Fury, given the somewhat level of inertia he displayed in such an important fight.

Joshua was tentative for most of the fight, merely posturing in the early rounds and pawing his jab, as he  allowed Usyk to dictate the pace of the contest, instead of using his superior reach, power, and greater physical strength to his advantage.  The display on show was akin to an episode of poor sparring in the gym. The former undisputed champion looked nothing like a man who should be sharing a ring with Tyson Fury for over £50m.

On Saturday’s performance, Joshua would have been out of his depth against Fury, and taken a big wage packet that his performance would not deserve.

Usyk had unwisely been written off my many boxing pundits who conveniently forgot that Joshua seems to have regressed form the once masterful assailant in the ring, to a gun shy technician, who eventually knocks out opponents who do not bring the entirety of Usyk’s confidence , determination and skill to the party.

Fury himself has questioned Joshua’s confidence in his ability- the plain answer being that since his loss to Andy Ruiz Jnr in June 2019, Anthony Joshua hasn’t shown the heart of a true warrior or champion. He boxes very apprehensively, like one in fear of defeat, rather than in anticipation of a stunning victory.

Saturday’s victory for Usyk wasn’t just about how good Usyk was, it was about how poor Joshua was as a champion.  Usyk simply exploited glaring shortcomings of Joshua which the Londoner should have overcome by now at this level of competition.

Though Joshua was criticised  in  some circles for an uninspiring safety first approach in regaining his belts against Ruiz Jnr six months later, Joshua deserved some credit for deploying a different tactic in beating Ruiz. But when he was  uninspiring in disposing of Bulgarian Kubrat Pulev in 2020,  the warning signs of an impending defeat once he significantly stepped up was all to evident.

Usyk is unarguably a talented fighter, but the problem was with Joshua failing to boss the significantly smaller man, and dispose of him as expected of a genuine champion holding multiple belts.

The likes of Lennox Lewis, Mike Tyson, and  Evander Holyfield, would have dug deep to stop Usyk before the fight progressed beyond the half way line.

With this loss, the prospect of a unification title anytime soon with either Tyson Fury or Deontey Wilder anytime soon has evaporated.

Joshua had reminded the press before the fight that he has a rematch clause in his contract should anything go wrong- and it went horribly wrong on Saturday night.

He must now return to the drawing board and figure out how to return and show more authority and self belief, or be relegated to the bracket of the ‘once were’ and ‘has beens’.

Meanwhile, it is Usyk, whose celebration has just began, and who will no doubt go into the rematch with more  confidence and  even better preparation.

As for Joshua, his main challenge will not be the training. It will be in the mental arena of adjusting his attitude to his opponents, and demonstrating the conviction of his renewed attitude.