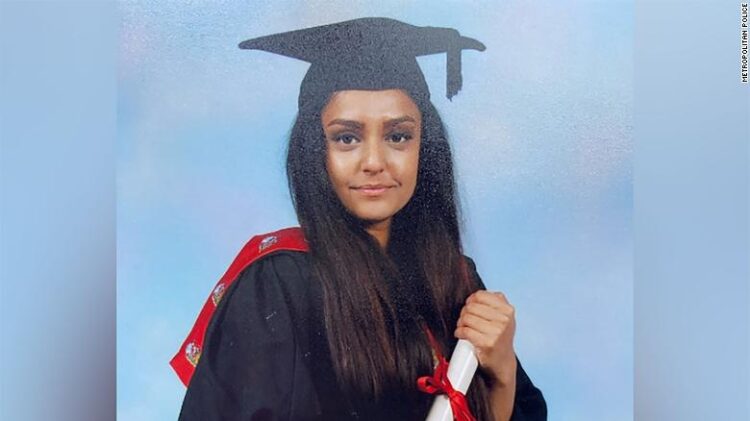 Cops say the suspect in the case of murdered Sabina Nessa tried to hide a reflective  red object. footage of the figure shows him looking over his shoulder, putting up his hood and attempting to conceal the red item on the night of Nessa’s death in Kidbrooke, south-east London.

Detective chief inspector Neil John, from the Metropolitan police’s specialist crime command, said: “People in the Kidbrooke area may recall seeing this man carrying a red reflective object, and possibly trying to conceal it up his sleeve. If so, please call police. He must be traced.”

The footage captures the man walking outside a block of flats in Pegler Square, close to where the body of the primary school teacher was found.

So far two men have been arrested on suspicion of Nessa’s killing but have been released pending further investigations.

The 28-year-old was attacked as she was walking to meet a friend at The Depot bar on Friday 17 September, shortly after leaving her home in Astell Road in Kidbrooke.

A police statement last night said that detectives, forensic officers and specialist staff were “working around the clock” to solve the crime.

Hundreds attended a vigil in Kidbrooke on Friday night and yesterday a book of condolence was opened for people to pay respects to the victim.

The book is in a community centre near Cator Park, close to where the 28-year-old’s body was discovered.

It was found last Saturday by a member of the public near a walkway in the park.

Her attacker was seen putting the 28-year-old primary school teacher over his shoulder and carrying her towards Cator Park where her body was found nearly 24 hours later, the Telegraph reported citing a police source.

Her body was found close to the OneSpace community centre within the park at around 5.30pm on Saturday, September 18.

It comes after the Metropolitan Police released an image of a man they would like to trace in connection with the investigation. Officers also appealed for help to trace a silver car he was thought to be driving.

The images show a balding man in Pegler Square, close to the bar where Ms Nessa had reportedly arranged to meet a date.