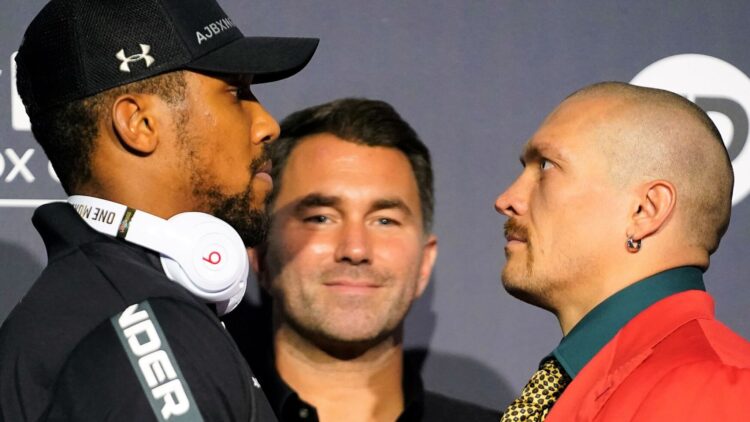 The  world heavyweight champ  will put his three world heavyweight titles on the line against the unbeaten Ukrainian(18-0)1, but boxing critic Danny Benn says Joshua will do very well to beat a man of Usyk’s repetoire.

The londoner is an overwhelming favourite to retain his titles, but boxing enthusiast, Danny Benn, says Usyk is a dangerous opponent with a high chance of toppling Joshua and seizing his belts.

Speaking to The Eye Of Media.Com by phone, Benn, the brother of former world champion, Nigel Benn, and Uncle of  boxing propsect,Connor Benn, said: ” I think this fight will tell us a lot about Anthony Joshua  and improve him significantly in time for Tyson Fury if he wins.  He will deserve alot of respect if he wins

Anthony Joshua has lost a lot of weight because he knows he will need to move alot against a mobile boxer like Usyk.

I think Usyk might beat Joshua because Joshua fights in a straight line. Usyk will give him angles, and Joshua will have to adapt  to his style. He will have to be at the top of his game to beat this man.

I think people ruling out Usyk before the fight is silly because this boxer is evidently very good.

This fight will be very good for Anthony Joshua’s experience if he can get past Usyk”,

At 6ft 6 inches with a very good record of 24-1, with 22 KOs, Joshua cannot afford to lose this fight, though he has a rematch clause in his contract. It will set his career back again and do untold damage to his reputation.

A two time olympic gold medalist and cruiserweight world champion, Usyk is both very mobile and technically gifted. His boxing Iq is without dispute,  his confidence high too.  What he lacks is sufficient experience at heavyweight and the accompanying test of resisting explosive punches from the likes of Joshua.

IThis is uncharted territory for Usyk, but his intrinsic talent and abilities suggest he is mentally and physically ready for the serious examination at heavyweight level, and at the pinnacle of the division.

At approximately 6ft 2 inches tall and 15 stone 8 inches, the diaprity in size between Joshua and Usyk is marked, but not as pronounced as was thought in advance of discovering the weight of the respective combatants for this intriguing clash.

Joshua, who will pick up £15m for this fight,  and will be his lightest for a fight so far at 17 stone 2, and has an advanatage of just over a stone in weight. His power is a lot more than that of Usyk’s, but the Ukranian who has trained very hard for this fight, hits hard enough to be a threat if he can soak in the punches that land from Joshua.

Joshua will look to combine speed with power in order to knock the confidence out of Usyk and force him to submission, but but the Ukranian’s speed and evasiveness could prove a challenge.

This is a must win fight for Anthony Joshua, who should find the measure of his opponent by the 6th round and win spectacularly by knock out, othewise get outclassed by the wiley Ukranian on points.

Defeat for Joshua will throw a spanner into the  works of the long anticipated unification showdown with either Deontey Wilder or Tyson Fury.

Joshua was  originally schedulled  to meet Fury on August 14 in  Saudi Arabia, for a lucrative £54m a piece fight, but the unification clash was aborted after an aadjudicator ruled that Tyson Fury was in breach of his contract to grant Wilder a rematch, after the gypsy king gave the American a hiding  in February 2020. That fight has now been reschedulled for October 9, and both Wilder and Fury will be watching this fight to confirm who they will be coming up against, should they win their own big championship test.