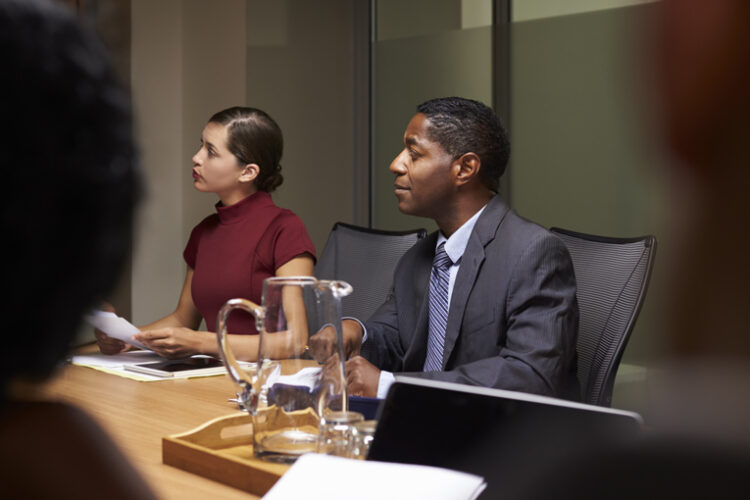 A solicitor has appeared in the High Court for pursuing a ‘campaign of harassment’ against the chief executive of the Solicitors Disciplinary Tribunal and a member of the panel which struck him off. Farid El Diwany allegedly breached an injunction preventing him from harassing Geraldine Newbold and Colin Chesterton, formerly a solicitor member of the tribunal, or any current or former member of the SDT 19 times in the space of 11 days in November last year.

The Solicitor Disciplinary Tribunal panel (pictured) conduct investigations against solicitors accused of misconduct, usually following a an inquiry made by the Solicitors Regulation Authority(SRA)

The 63-year-old is said to have left a voicemail message on the mobile phone of Simon Tinkler, a partner at magic circle firm Clifford Chance who dismissed El Diwany’s application to be restored to the roll last year, three days before his bid to return to the profession was heard by the tribunal.

El Diwany was struck off in 2019 after he was twice convicted of harassment in Norway, in 2001 and 2003, and failed to tell the regulator. An appeal against that decision was rejected by the High Court, as was an application for permission to appeal. He practised for about 10 years with three firms in England despite having two convictions for harassment in Norway dating from 2001 and 2003. The convictions were reported to the Solicitors Regulation Authority in 2017 by a partner at the firm for which El Diwany was then working, which had not previously been notified.

In a desperate move to return to the profession, Diwany applied for his name to be restored to the roll in November, arguing that the panel which struck him off ‘contained no Muslim members and this apparent Islamophobia had rendered its decision unfair and unreliable’, the SDT said in a recent ruling.

He practised for around 10 years with three firms in England despite having two convictions for harassment in Norway dating from 2001 and 2003. The convictions were reported to the Solicitors Regulation Authority in 2017 by a partner at the firm for which El Diwany was then working, which had not previously been notified.

He also applied for all members of the SDT’s new panel to recuse themselves ‘on the basis that he required an all-Muslim panel to determine his substantive application for restoration’, claiming that ‘anything other than an all-Muslim panel would demonstrate actual and apparent bias’.

His application at the time was dismissed for restoration to the roll was also dismissed, with the SDT finding that it was ‘a device to go behind his conviction and an attempt to re-litigate matters already decided upon and appealed’.

‘His failure to grasp this point was found by the tribunal to be indicative of Mr El Diwany’s absolute lack of insight on the conduct which had resulted in strike off,’ the tribunal added.

Last month, his judicial review against the Solicitors Regulation Authority over its decision not to investigate his complaint against two members of the SDT which struck him off – one of whom was found to be totally without merit.

Appearing  remotely before Mr Justice Sweeting on Thursday El Diwany argued that his communications with the claimants were ‘innocuous’. ‘There was nothing illegal or harassing about them,’ he said.

Newbold and Tinkler also appeared remotely, told the judge he did not want to be ‘present in the same courtroom’ as El Diwany.

Tinkler told the court he has sat as a member of the SDT ‘for over a decade and have done several hundred hearings and I have … never before had any contact from any of the individuals outside of direct within the tribunal walls’.

The Harassment Act 1997 describes harassment as pursuing a course of conduct that causes alarm and distress, and one which a reasonable person in the same shoes would feel alrm and distressed.

El Diwany apologised for being ‘blunt’ with Tinkler and said he would not attempt to contact the claimants again, adding that they should ‘rest easy and forgive and forget’.

If found guilty, ElDiwani could be imprisoned for six months, or face a conviction with a fine.