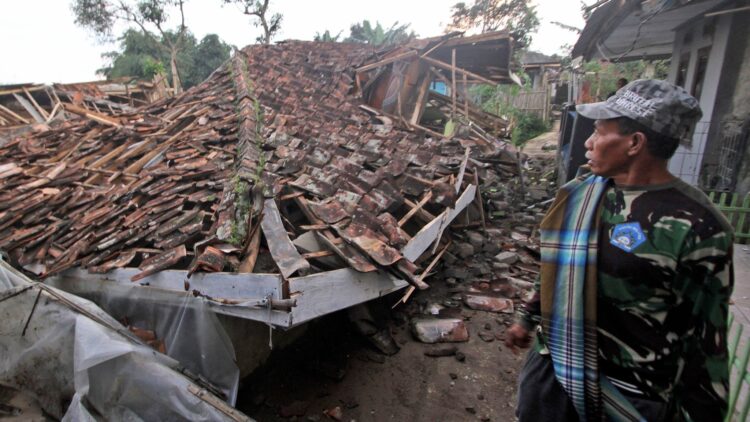 A number of those killed and injured in a major earthquake on the Indonesian island of Java were children who were at school when it hit, rescuers say.

The shallow 5.6-magnitude quake struck in mountains in Indonesia’s most populous province of West Java, causing significant damage to the town of Cianjur and burying at least one village under a landslide.

West Java’s governor Ridwan Kamil said on Monday: “The majority of those who died were children.”

He added that many were public school students who had finished their regular classes and were taking extra lessons at Islamic schools.

The local administration in Cianjur says the death toll has risen to 252 people.

An estimated 22,000 houses were damaged by the quake.

The 5.6 magnitude quake struck a mountainous region on Monday, causing landslides that buried entire villages near the West Java town of Cianjur.

Victims were crushed or trapped after walls and roofs caved in. “It all happened so fast,” Aprizal told AFP news agency.

A representative of the National Search and Rescue Agency also confirmed that many of the dead were young people.

“Most of the casualties are children because at 1pm, they were still at school,” said Henri Alfiandi.

The earthquake, which struck at a shallow depth of 10km, was followed by dozens of aftershocks which caused more damage to the area where poorly built homes quickly collapsed.

In the village of Cibereum, a family was trying to retrieve the body of their eldest son – a 28-year-old man who had been crushed to death when the other levels of the home fell on him.

Rescuers struggled to sift the rubble.

“We have to dig through the concrete of the second floor that crushed the victim. But we have seen the body,” a military official, First Sergeant Payakun told the BBC.

Authorities say at least 2,200 homes have been flattened and more than 13,000 people evacuated.

President Joko Widodo visited the remote disaster zone on Tuesday where he was pictured with responders.

“My instruction is to prioritise evacuating victims that are still trapped under rubble,” he said.

Authorities have deployed hundreds of police and other rescuers to the region to help the rescue effort.

Earthquakes are common in Indonesia, which sits on the “ring of fire” area of tectonic activity in the Pacific.

The country has a history of devastating earthquakes and tsunamis, with more than 2,000 people killed in a 2018 earthquake on the island of Sulawesi.

“The challenge is the affected area is spread out … On top of that, the roads in these villages are damaged,” Alfiandi told a news conference, adding that more than 13,000 people had been evacuated.

“Most of the casualties are children, because at 1 p.m. they were still at school,” he said, referring to the time the quake hit.