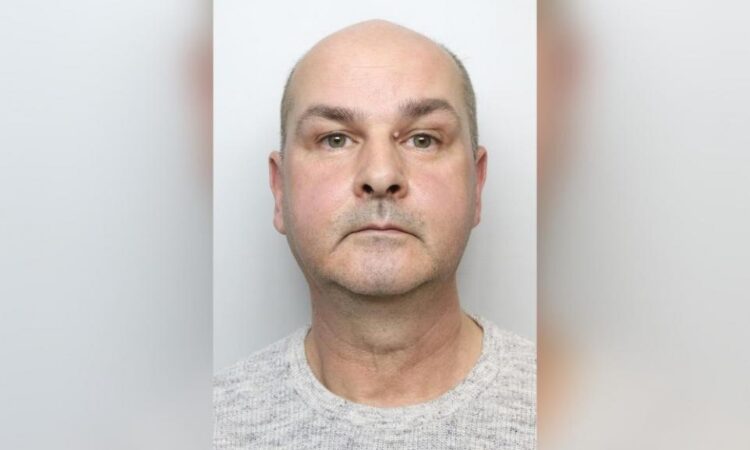 A fantasist who invented stories about being kidnapped and held hostage by a gang from Manchester, just to extort money from a terrified woman, has been jailed for three years.

David Bunting led a campaign of fear against his victim by lying that he had killed three gang members and was being ‘left on the brink of death’ after they had tracked him down, Bradford Crown Court heard today.

He had hoped to frighten her into sending him money to appease the fictitious gang members, but his dodgy plan failed and backfired on him.

Prosecutor Rebecca Young told the court that he was in a brief relationship with the woman several years ago while he was still living with a partner.

He began to send her threatening and abusive messages when she decided to end the relationship, after he disappeared for long periods of time.

The creep intimidated the woman by lying to her that he had killed three members of a gang from Manchester and others had tracked him down wanting retribution.

Bunting then purported to be one of his own family members messaging the woman to say he had been beaten up and was ‘on the brink of death’ in a hospital in Devon.

A further message demanded £8,000 to stop one of her relatives being exposed as a criminal.

She blocked the number, but Bunting changed SIM cards to pretend to be other people sending the messages.

Miss Young said the victim was terrified that she was going to be killed if she didn’t provide the money.

Bunting now accepted that he sent the messages, the court was told.

When he was arrested, he denied all knowledge of them, saying he had been ‘set up.’ Investigations revealed that the furthest his van had travelled in that period was Manchester.

Victim impact statements from the woman said she had been too terrified to even hang out the washing.

“Every message I get makes me feel physically sick and I can’t breathe,’ she said.

She couldn’t sleep and feared every noise in the street.

Mitigating for him, Bunting’s barrister, Harriet Lavin, said he had no previous convictions and had acted out of jealousy, and thought he was having a nervous breakdown at the time.

It wasn’t sophisticated offending and it was four years ago.

Bunting was in employment and financially supporting his ill partner.

Judge Andrew Hatton said Bunting had been involved in ‘a romantic entanglement’ with his victim several years ago while still in another relationship.

Then she had received threatening and abusive messages from different numbers. They were bizarre and disturbing and all done to extort money.

“It was fantasy but accepted by her and she terrified,” Judge Hatton said. She lived life paralysed with fear.

The judge also imposed an unlimited restraining order without limit of time to protect the victim and her family in the future.