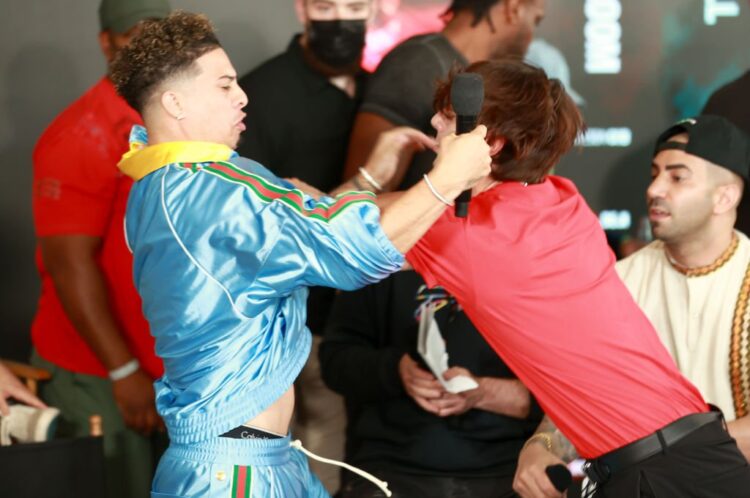 A massive brawl  kicked off at the YouTube vs TikTok boxing press conference between influencers Austin McBroom and Bryce Hall.

The press conference to promote  the fight between Stars from YouTube and TikTok are due to fight each other in the boxing ring on June 12 and the build up for the event is starting to heat up.

The ‘Battle of the Platforms’ has gained a lot of attention as fans of the stars hope that their favourites can come out on top in the ring.

The Press Conference on May 18 was designed to build up interest in the fight, and the fighters went a few steps further to build up that interest. Press conference brawls is not something fight promoters generally endorse, but it is an undeniable fact that the more intense the rivalry between two oppnents in combat, the greater the interest in the actual event.

Austin and Bryce will be fighting in the main event of the evening and you could immediately tell tensions were high as the two started having a war of words a couple of minutes into the press conference.

The fight began after the two sat down together to talk about their upcoming fight, Bryce expressed his anger towards Austin. He said: “Don’t step up on me like that”.

Austin stood up and  the pair began pushing each other to the ground and a brawl emerged.

Others around intervened to break up the fight from getting out of hand. Following the press conference, Austin and Bryce took to social media to continue their heated face-off.

McBroom’s YouTube channel, The ACE Family, has 19 million subscribers, while Hall has 19.9 million followers on TikTok.

The two are scheduled to fight at Hard Rock Stadium in Miami on June 12.

Youtube and TikTok have become massive attractions online, with  the growth of interest depending on the show or entertainment on offer. Both mediums of public exposure have been hugely successful over the past few years, generating large revenues for its stars and plenty of interest from the general public.

Youtube has long been an open platform for everybody, depending on what individuals have to offer within the policies of the respective social media platforms.