A picture of a UFO  taken over the mountain in Waikane, Hawaii is being assessed by UFO investigators from Mufon.

The anonymous UFO spotter captured the image last week then submitted it the UFO site.

In their account to MUFON, the UFO spotter said: “I was taking pictures at Kaneoha Bay at lunch time of the mountains.
“I had on the “multiple pictures” setting which means if I hold down the button of my camera then it will continuously snap photos with not even a second in between shots.
“I had this option on and took multiple pictures of the mountains.
“I went to go look back at my pictures when I noticed one of them was not like the others.
“At first I thought a wood chip was on my lens, but I looked closer and I realized I had spotted a UFO.”

Admitting to previously be a skeptic of ufos, the man said he was so ”creeped out” by the sighting that he decided to take no chances
Reliving the moment of his experience he said: “I don’t really believe in stereotypical UFOs but this creeped me out so much that I’m reporting it just in case it really is one.
“The unidentified object I saw was a disk, football shape and it was yellow/orange. 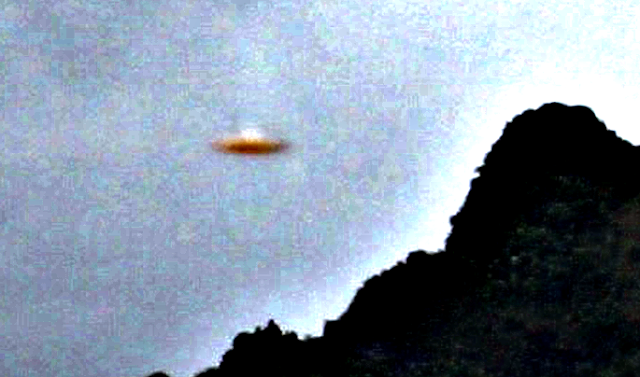 The ufo seen in hawaii

As soon as I saw the picture and realized it wasn’t a football or wood chip I got a very eerie feeling. This was the moment the observer’s skepticism must have been confronted by the strong reality of their experience. Skeptics will always remain when it comes to ufos and the paranormal world. It is a world far removed from the normal. However, this skeptic was clear about what he saw.

“When I zoom up on my camera, there seems to be a dome on the top as well.
“As soon as I saw the picture and realized it wasn’t a football or wood chip I got a very eerie feeling.
“I showed my brother and dad the photo right when I saw but they didn’t seem to be worried much about it.
“I attached the photos in this report as well.
“The first one should be a plain picture of the mountains and the second one has the weird object in it.
“It seems to be hovering over the mountain in the middle right side of the photo.”
Another prominent UFO enthusiast, Scott C Waring, editor of ufosightingsdaily.com, went as far as claiming the footage to provide evidence for an alien base on earth. Far fetched as that sounds, the phenomenon of UFOs has always been an outlet for all kinds of strange phenomena and realities.
He wrote: “UFOs are often seen around mountain tops because their exits from the underground bases need to be in locations where few people ever venture.

Yesterday, the eye of media.com revealed that ufo drills have been taking place in Uk primary schools unbeknown to most British citizens for the past eight years. Despite being a mother of a 10-year-old primary school boy, this was news to me until it was brought to my attention.
Spread the news