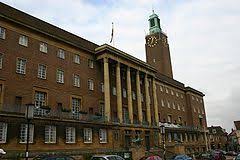 Norwich Council is to face the local Ombudsman after a landlady blamed the council for causing her psychiatric illness.

The council is accused of being complicit in the harassment of  the landlady through one of its own staff, causing her psychiatric illness.  She is currently on anti depressants. The woman  from Plumstead Commons ,was attacked by a former tenant of hers after she pursued the man for rent payments.

The brute, Christian Nwala, 47, heavily assaulted the woman, damaging her eye socket in the process and  leaving her with a swollen eye.  The woman  was forced to endure a criminal case against him and a protracted civil case to get him out of her property, which she successfully did in 2018.

Ray Seabrook from the Housing Community Service said in his response:

”Under the Housing Act 2004 when a tenancy is created as an assured shorthold tenancy, at the end of the initial term, this falls into a periodic tenancy and irrespective of whether rent is received or not, the terms of the tenancy remain in place.  There are legal means to regain possession which a Landlord may apply under specifically Sections 8 and 21 of that Act.  Section 8 specifically deals with the non-payment of rent”.

”In either case, the due process must be followed for a landlord to gain possession of their property.  If this process is not duly followed the tenancy remains in place and the Council has a duty to respond to complaints raised by tenants in private rented accommodation as previously advised”.

Norwich Council was in error by failing to realise that Mr.Nwala should never have been should not have been treated as a tenant in the circumstances of a criminal case and the fact he had not paid rent for 14 months.

The landlady, whose identity cannot be revealed,told The Eye Of Media.Com:   ”this man stayed in my property for a year after he assaulted me, without paying me a penny.  Even after he was convicted for assault he appealed the conviction, forcing her to endure further misery.

Now I am suffering with post traumatic stress because of the shock and trauma it caused me. I lost a lot of money over it”

The landlady faced further delays in the case after Nwala denied receiving the two months notice she gave him, despite admitting receiving it in the criminal case.

The judge adjourned the case, ordering the lady to give him the due notice. He also reprimanded the landlady for not having her name and address clearly written on the property she was renting.

In the meantime, the abusive tenant regularly called Norwich council to complain that the property needed repairs. The council contacted the landlady for the repairs; this worsening her distress. A staff of the council, Moses Barrett, is accused of furthering the landlady’s stress by continuously calling her on behalf of the violent tenant who was facing a criminal hearing.

Norwich Council told The Eye Of Media.Com that no matter the issues between the landlady and the tenant, she had a duty to address issues in the property. That position appeared  unreasonable and insensitive to the criminal assault she had just suffered and the distressing civil case with the man over moving out of the property.

Now, the woman who is suffering from psychiatric illness says she suffers flash backs and has become very agitated. She is contemplating suing the council, but wants to take the case to the Local Ombudsman first .

She says that a member of the council, Moses Barrett, continuously called her to pursue repairs on behalf of her attacking tenant, believing his pursuit to have been borne out of a loyalty for the man who comes from the same country.