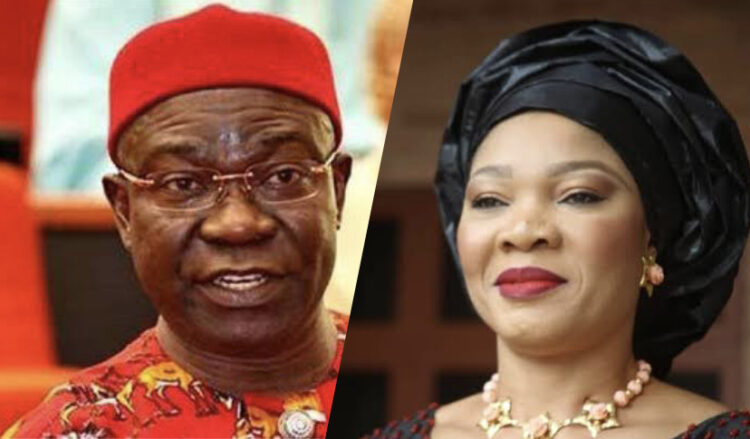 A Nigerian couple  has been  arrested  in the Uk on suspicion of plotting to harvest the organs of a child in the UK are one of the west African nation’s most high profile politicians and his wife.

Ike Ekweremadu, 60, a People’s Democratic Party politician(PDP) for 19 years who was once Deputy President of the nation’s senate, was held with Nwanneka Ekweremadu, 55, in Britain this month. Mr Ekweremadu served three terms as Nigeria’s deputy president of the Senate, from 2007 to 2019.

Mr Ekweremadu has been an elected senator at the Abuja-based parliament since 2003 , following his foray  into politics after years as a lawyer. His wife,  who is five years his junior, is an academic and doctor.

Both he and his wife have been charged with conspiracy to arrange or facilitate travel of another person with a view to exploitation, namely organ harvesting. The couple have been remanded in custody and  have appeared at Uxbridge Magistrates’ Court today.

The Metropolitan Police said a child has been safeguarded and taken into care. Scotland Yard has not given the gender or the age of the child – or the location of the arrests.

A spokesperson from the Met police told The Eye Of Media.Com  that the accused has appeared at Ubcridge Magistrates Court  and that the Met have appeared as witnesses, but no further information could be given whislt court proceedings are active.

The child ,  a 15 year old boy has been taken into care. Detectives launched an investigation after they wereerted to potential modern slavery offenses in May.

The suspects share the names and ages of a former deputy president of the Nigerian Senate and his wife.

Organ harvesting involves removing parts of the body, often for commercial gain and against the victim’s will

The Metropolitan Police has said the child, who is under the age of 18, at the centre of the alleged plot is in care. Organ harvesting involves removing parts of the body, often for cash and against the victim’s will.

Ekweremadu has been in the UK for at least the past fortnight having met with members of the Nigerian community in Britain in Lincoln around ten days ago.

The investigation was launched after detectives were alerted to potential offences under modern slavery legislation in May 2022, the force said.

In 2017, a former Nigerian government minister claimed that migrants from his country were having their organs harvested after being sold into slavery.

Femi Fani-Kayode, a former aviation minister in Nigeria, claimed that 75 % of slaves who have their organs harvested in North Africa are from his country.

The Cambridge University-educated lawyer who hails from a generation of lawyers, added that the victims have their ‘bodies mutilated’ and are ‘roasted like suya [shish kebabs]’. He went on: ‘Roasted alive! This is what Libyans do to sub-Saharan Africans who are looking for a transit point to Europe.

‘They sell them into slavery and either murder, mutilate, torture or work them to death.’.

Only last year, an article in one of Nigeria’s prominent daily media outlet, This DAY spoke in detail about voodoo practitioners trading in human flesh and all other human-anatomy body parts whilst ritualising human blood as the “lubricating oil” to quick cash and wealth.

The conventional understanding  among Africans, according to sources in Lagos Nigeria, is that individuals who commit such atrocities believe it would fetch them great financial success, and also luck in their careers.

The children  in such cases are sacrificial objects to the future success of those sacrificing them, their blood fed upon by the spirits who will reward those obedient men and women for making the cruel sacrifices to them.

The charges in this case  may be different.

Details of the charges emerged that the serving Nigerian Senator, officially wrote to the British High Commission, Abuja, on December 28, 2021, in support of “the visa application made by  a Mr Ukpo Nwamini David, who is currently having medical investigations for a kidney donation to Ms Sonia Ekweremadu.”

The senator was said to have had £20,000 in his possession when arrested, which was immediately seized.

She said the Attorney General will need to make a decision within 14 days on whether they could charge them in the UK for all the alleged offences.

The court heard the couple, who have four children, have an address in Willesden, north west London, where their children live.

Lawyers Gavin Irwin, representing Ike and Antonia Gray, representing Beatrice, said their clients should be bailed under strict conditions but their application was refused.

Mr Irwin told the court: “He is a member of the Senate of Nigeria.

“He previously had an even more senior role as the Deputy President of the Senate of Nigeria.

“He has led a blameless life as a public servant up until now.”

Chair of the bench Lois Sheard told them: “These are serious allegations and this matter is now being adjourned to be listed on July 7 at this court.”

The child has been cared for by safeguarding authorities and the Metropolitan Police.