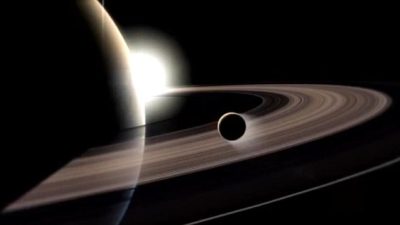 Nasa has announced findings of likely life discovered through cracks at the bottom of Saturn’s moon’s icy surface.

Apart from oxygen, carbon dioxide, hydrogen, phosphorus, and liquid, among others, have the conditions for creating life

.Hydrogen, when mixed with Carbon dioxide, produces menthane, which has also been spotted by scientists studying Saturn’s moon.

The finding is the most significant discovery of the sign of alien life made by NASA, who have frequently been accused of hiding evidence of ufos from their satellite feed.

However, NASA is progressively exploring and revealing the presence of chemical energies and reactions that suggest life at the bottom of Saturn’s moon.

Scientists insist that the only explanation for hydrogen in the orbit of Saturn’s moon is hypothermal reactions of water and rocks at the bottom of the moon’s surface.

The hypothermal reactions provide evidence of the presence of a chemical energy capable of supplying life.
All the more significant is the fact the moon is 887 miles away from the moon.
The announcement brings Nasa one step closer to their discovery of life in other planets beyond ea