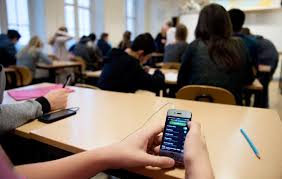 Pupils in British schools are being encouraged to use their phones during school hours, contrary to previous laws that prohibited them from doing so.

The use of mobile phone had been disallowed for some years now, to promote discipline and focus. This is all being abandoned  for the sake of determining whether a child has been in contact with another student who has the virus, even though we know children are less vulnerable to Covid-19. The new flexibility is likely to increase the likelihood for new secondary school pupils who have already lost half a year due to school closures, to become more playful and less serious.

Under new guidance provided by the British government , students or staff could receive a notification via the app that they have been in close contact with a confirmed case and should therefore self-isolate.

The app uses the minimum amount of personal data possible, which means it will not know if that contact took place in an education setting. Phones can be a source of huge distraction to pupils. Rather than concentrate on their academics, many pupils are likely to use their phone to play games and sent lurid text messages to the opposite sex or their friends.

The app, which uses bluetooth to track whether people have come into contact with confirmed Covid-19 cases, is a “key part of the Uk’s ongoing coronavirus response, aiming to extend the speed, precision and reach of NHS Test and Trace”, the guidance for schools states.

While there is “no requirement for settings to change existing policies on the use of mobile phones by students due to their use of the app”, the guidance goes on to state that schools “may want to do so if they currently do not allow mobile phones on site”.

“There are likely to be benefits to settings, if a number of students and staff have the app and make use of it during the day. This is because the information it provides may help to limit the number of other students and staff who are required to self-isolate when there is a positive case.”

The new guidance comes after a number of senior ministers spoke of their support for bans on phones in schools. Headteacher’s have now been given flexibility to determine whether or not mobile phones should be allowed on site

The app is available for anyone aged 16 and above, meaning some year 11 pupils and the majority of those in years 12 and 13 will be eligible to download it, along with school staff.

The new guidance also states pupils may be informed whilst in school that “they have been in close contact with a positive case”.

However, use of the app in schools “does not replace the requirement of individuals to social distance or to report positive cases to the setting”.

The guidance advises pupils or staff who receive a notification they have been in close contact with a confirmed case to isolate, while pupils should also inform a member of staff.

“No further action is needed unless the student or member of staff goes on to become a confirmed case themselves”, the guidance adds.