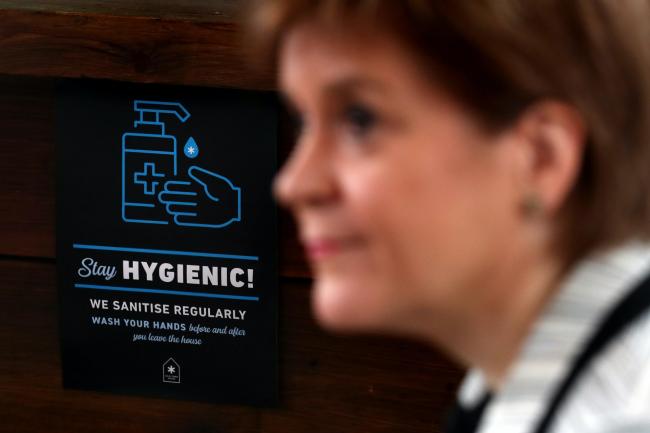 Nicola Sturgeon has announced a ban on indoor household visits and a curfew for pubs and restaurants as part of a package of measures to try to stop coronavirus from “spiralling out of control” in Scotland.

The First Minister said she is “acutely aware” the new restrictions will not be welcomed but insisted they are “absolutely essential”.

Ms Sturgeon, who revealed the Scottish Government is keeping the possibility of a time-limited “circuit breaker” lockdown under review, set out details of the changes shortly after Prime Minister Boris Johnson confirmed his plans for England.

In addition to the ban on visiting others inside their homes, she said there will be a “strict nationwide curfew” for pubs and restaurants, starting at 10pm on Friday.

People are also advised not to share car journeys with anyone from outside their household.

Regulations enforcing the changes will come into place from Friday but Ms Sturgeon urged Scots to comply from Wednesday.

Some have questioned why pubs are still open when cases of the virus are spreading rapidly – 383 more people have tested positive in Scotland in the last 24 hours, with one further death – but the First Minister said the Scottish Government has a duty to balance action to curb the virus with the need to protect businesses.

She hinted if the Scottish Government had greater borrowing powers or if it could extend the furlough scheme, greater restrictions might well have been imposed.

While stressing there will be exemptions to the ban on indoor household visits, Ms Sturgeon told Scots: “Please don’t meet people in their homes or your home – because that is where the virus often spreads.”

In a statement to Holyrood, the First Minister told MSPs the average number of new coronavirus cases has risen from nine a day in mid-July to 285 and the percentage of people testing positive has increased from less than 1% in late August to more than 7% now.

Household interaction is often “key driver of transmission” of Covid-19, she said.

A ban on visiting other people’s homes is already in place in large parts of the west of Scotland and Ms Sturgeon said early data from there suggests this is “starting to slow the increase of cases”.

She added: “So if we extend it nationwide now, in an early and preventative way, we hope it will help to bring the R number down and the virus back under control.”

There will be exemptions, such as for grandparents providing informal childcare, for couples who do not live together, for tradespeople and for those living alone, or alone with children, who have already formed extended households.

Let’s keep going, try to keep smiling, keep hoping and keep looking out for each other

The First Minister said: “Today’s measures – although tough – are not a lockdown. They are carefully targeted at key sources of transmission.

“And we believe they can make a significant difference while keeping our schools, public services and as many businesses as possible open.”

She accepted “all of this is incredibly tough”, adding six months on from lockdown being imposed “it only gets tougher”.

But she added: “Though we are all struggling with this – and believe me, we all are struggling – let’s pull together.

“Let’s keep going, try to keep smiling, keep hoping and keep looking out for each other.”

Ms Sturgeon reiterated the Scottish Government’s advice is people should work from home when possible, adding ministers will introduce a legal duty on businesses, if necessary to allow homeworking.

Speaking about the series of restrictions – which will be reviewed in three weeks’ time – the First Minister insisted: “We judge that this will give us the best chance of avoiding tougher or longer lasting measures later.”

The Scottish Conservatives’ Holyrood leader Ruth Davidson said there is now a “palpable sense of dread” about the next few months.

“There is no denying this is going to be a hard, dark winter,” she said.

He added: “The First Minister was aiming to eliminate the virus but now the entire nation is back under intense restrictions.”