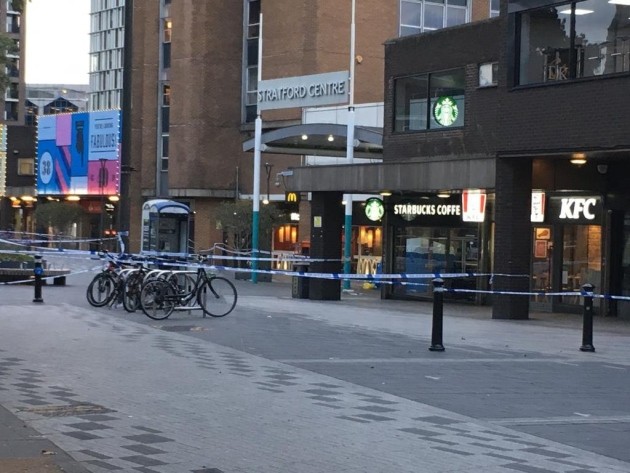 The Met Police are hunting down a murderer who killed a school boy in broad day light outside a busy East London Shopping Centre.

Cops are studying hours of CCTV footage after the 15-year-old boy was stabbed in the street after  getting off a bus near Tramway Avenue in Stratford, East London shortly after 3pm yesterday.

He died at the scene in the presence of  passers, some of whom tried to save his life by giving him first aid and ambulance paramedics battling to save his life. Next of kin have been informed.

“We share the concern and alarm this murder will no doubt cause and will do everything to catch those involved and bring them to justice.”

A second 15-year-old found with stab injuries was taken to hospital, but his injuries were not life threatening.
No arrests have been made so far, Scotland Yard confirmed last night.

The Met’s Specialist Crime command have taken over the case.”This young man’s family and friends are tragically having to come to terms with this terrible loss of life,” Det Chief Insp Soole added.
“The schoolboy had his whole life ahead of him, everything to live for.”

The boy was attacked after a fight broke out on or shortly after getting off a bus which stopped close to Stratford shopping centre.  Police are appealing for witnesses, anyone who may have seen what happened, to contact them.
“This is a very busy area and lots of people would have been out on the school-run or making their way home,” the detective chief said.

“We know the boy’s friends came to his aid and members of the public gave first aid at the scene.

“We need anyone else who has information and has not yet spoken to police to come forward. Anyone with information should do the right thing and get in touch.”
Police are studying all street CCTV footage and carrying out forensic analysis in the cordoned off area to build a clear picture of what unfolded.