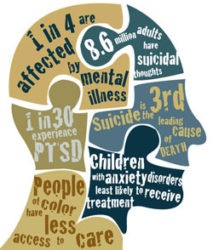 Mental health education is being planned for UK schools, the eye of media can reveal.

News of the plans emerged today , as talks with professionals interested in the idea began at earnest.

Health professionals have expressed an interest to work with schools and raise awareness of mental health.

Discussions have taken place today between health professionals, the eye of media.com and six schools, none of whom what to be named at this stage.

The move, scheduled to begin in May, and take off properly in September is not only targeted at schools believed to have many mental health sufferers. There should be no taboo associated with schools that participate in the scheme.

The issue of mental health among children is more serious than many realise .

Many children suffer from mental health, and most don’ t even know about it. Mental health can arise out of a genetic disorder, or could arise due to troubling life experiences in an individual’s past or present.

Awareness of mental health is the first step in addressing the problem. Understanding can empower victims to overcome mental health once they know the signs to look out for.

Once children understand what mental health fully is , they will be motivated to battle it in a methodical and sustained manner.

Mental health is more common than widely realised. Experts say one in four people suffer from mental health, a disturbing fact in itself if accurate.

Ironically, there is a huge absence of education on the subject, and this is dangerous.

Understanding the causes and solutions of mental health will increase the knowledge of children and develop their intellect at the same time.

That way, children can recognise the factors that contribute to mental health and operate more effectively to root it out. Mental health can be beaten, but only with the right tools and approach.

If children can recognise the symptoms of mental health, they will be better equipped to beat it, or at least limit its manifestation. It will also influence the behavior at home and at school.