Police in North Manchester have today raided a network of shops selling ‘legal highs’ and psychoactive substances. The raid follows an investigation by Greater Manchester Police after a large amount of legal highs were  seized from a a centre in Manchester City and another in a  storage unit in the Strangeways area.

The packets, which were subsequently tested forensically, revealed a large proportion of contain illegal Class B drugs such as methylphenidate and ethylphenidate.

Officers from Greater Manchester Police’s North Manchester division then executed warrants at two shops in Manchester city centre as well as  the shop in Strangeways, and a private property in Sale.As a result of today’s raids, numerous packets of ‘legal highs’, bags of pills and a large amount of unknown powder were seized from the shops and will now be subject to forensic analysis by experts to establish their true chemical composition, according to police. Legal highs have become a craze among many of today’s youths, with many happily substituting them for the traditional sunk smoked by millions of Brits across the nation.  A number of people have been killed by the drug, and many more hospitalised, but there are still many who indulge in the drug habitually with no concern for its harmful effects. Eye of Media have been privately conducting wide ranging inquiries into the substance for the past 2 months following several disturbing reports of the substance, and its increasing use by teenagers and young adults.
The so called legal highs are currently on sale in shops because of a loop hole in the law that allow them to be sold. They are not meant for smoking, but many irresponsible people chasing for a high regardless of the dangers have taking advantage of the fact they can be bought in the streets. They are also commonly smuggled into jails and seen as a way to get high without fear of any legal implications. However, they are a lot stronger than even the strongest sunk or any other form of cannabis available on the illegal market on the streets. The rids today indicate that some of them may contain more dangerous substances than previously believed.
Many regular users of Cannabis find legal highs too strong for them, but there is a growing number of youths whose bodies are ore tolerant to the dangerous product, yet remain very susceptible to the harmful effects it has. Consumption of the product has the tendency to make the hear palpitate dangerously fast and dehydrate the body. It also causes a frightening level of paranoia, and many who have tried the deadly product with a vow not to try it again, have told of the real concern they have of ‘dying’ whilst under the influence of this dangerous substance which really should not be available in stores for legal purchase. 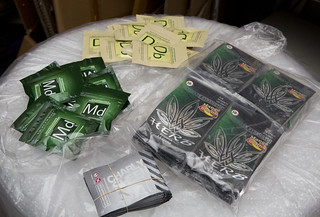 Police Sergeant Adam Cronshaw said in a press release, one of which was sent to eye of media: “Today’s warrants are GMP’s response to safeguard vulnerable people from ‘legal highs.’ We are encountering increasing numbers of young people across Manchester under the influence of these drugs making them vulnerable to child sexual exploitation and addictive behaviour.

“We want to satisfy ourselves, and the community, that illegal products are not being sold.

“A recent report revealed that since 2009, the number of deaths attributed to these ‘legal highs’ has increased by 800 percent, which shows the very real dangers anyone faces when taking these substances. Essentially, you are playing Russian Roulette with your own lives. Even though these shops will say that they only sell to over 18s, it is clear that they are eventually ending up in the hands of children. They only cost £8 per packet and so are easily affordable. Some of these shops even sell their products over the internet.

“Users may have no idea what substances may be contained within the packets as there are no legal quality controls and the packets are often marked with ‘not for human consumption’ to absolve the sellers from any responsibilities should someone become ill from taking them.

“A ‘legal highs’ information booklet has been produced aimed at 14-19 year olds which explains what they are, the risks involved and signposts to local drug support agencies. We hope to roll it out soon to certain schools and colleges to be delivered within educational workshops to improve awareness. However, parents may also benefit from understanding the realities of these drugs which may impact on their children’s lives.

“I urge people to remember that just because it says it’s legal does not mean it’s safe.”

Chief Inspector Patrick McKelvey added: “The operation this morning is just the start of a campaign to get legal highs off the streets of Manchester.

“I know of two cases where legal highs may have contributed to the deaths of two young people.

“The substances that were seized this morning will be forensically tested to gain an understanding of the constituents of these products, and the photographs taken today will assist parents and carers to identify what these substances look like and take the appropriate action.”

We at Eye of Media,  hope to see these products of the entire streets of Britain. Their use sets a dangerous precedent for young teenagers in schools, and could potentially lead to even more deaths. 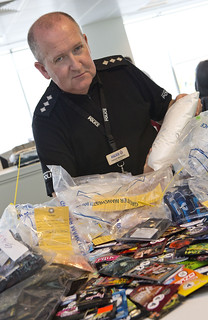