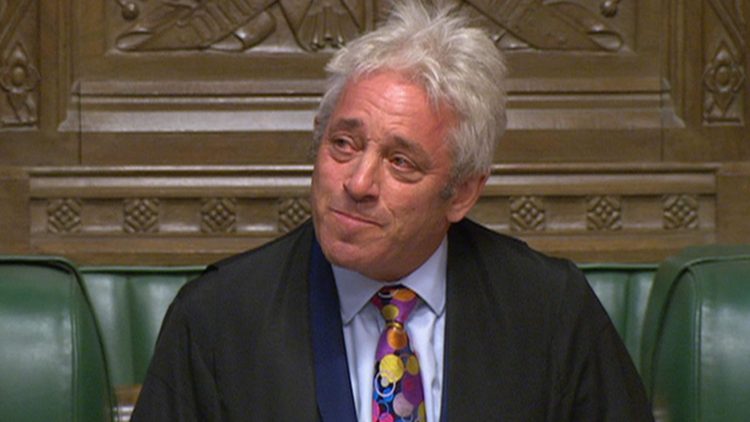 John Bercow’s decision to step down as the Speaker of the House of Commons after ten years in the respectable post comes as a blow to British politics and compounds the political crisis facing the Uk. Bercow said he would leave his role by 31 October at the latest, but he could stand down sooner if MPs vote for an early election.
He told parliament he had promised his family to leave the job after 10 years of living in the Palace of Westminster. In an emotional speech watched  by his is wife Sally from the gallery, Mr Bercow confirmed  he would stay  until Brexit day at the latest because it was the “least disruptive” timetable. His resignation comes amid a raging political crisis in the Uk over the terms of  leaving the EU, with Boris Johnson vowing to take Britain out of the EU by the end of October in consistence with the outcome of the 2016 Brexit referendum.

However, in the absence  of unless a negotiated new deal acceptable to Parliament, Johnson will be legally bound to seek a delay under the terms of legislation passed by MPs  which gained Royal Assent on Monday. Bercow’s announcement to step down is understood to be a mark of loyalty to angry Mps who are unhappy with the drastic steps being taken by Boris Johnson to prorogue Parliament

MPs, mostly from the opposition benches  applauded Bercow’s  moving speech as he thanked them, saying: “You really are a very, very generous bunch.” “I wish my successor the very best fortune in standing up for the rights of MPs individually and for parliament institutionally,” he added.

“At the 2017 election, I promised my wife and children that it would be my last,” he said. “This is a pledge that I intend to keep. If the house votes tonight for an early general election, my tenure as Speaker and MP will end when this parliament ends.
“If the house does not so vote, I have concluded that the least disruptive and most democratic course of action would be for me to stand down at the close of business on Thursday, 31 October.”2009 as speaker – a job that puts him in charge of presiding over Commons proceedings, including picking which amendments to draft laws are voted on.

Bercow was first elected as a Conservative MP in 1997, and went on to serve as shadow chief secretary to the Treasury and international development secretary.  In his speech, he said it was important an “experienced figure” chaired debates in the final week of October leading up to the UK’s possible exit from the EU.