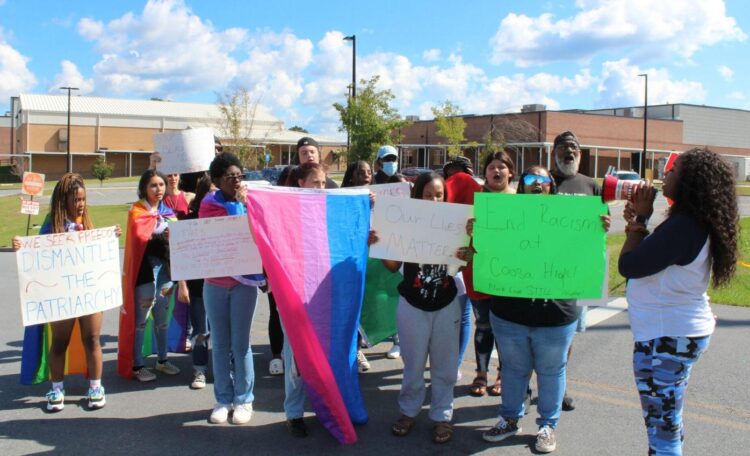 An Italian school is under pressure to explain why a group of Black high school students in Rome, Georgia were suspended from school for 2 weeks, for planning a demonstration to protest racial harassment.

In what appered to be a clear case of racial discrimination from Coosa school in Georgia, the white and Hispanic classmates who also planned the same protest were not disciplined.

The suspensions will mean the pupils miss their homecoming.

After a group of students approached school administrators to report the incident, the black students who were at the meeting were suspended from school for two weeks, while their white and Hispanic classmates were not.

Students involved in the protest told CBS 46 that the school handed down suspensions to the Black teens who planned the demonstration, but failed to discipline the white Latino students that participated.

Coosa High School has been asked by The Eye Of M,edia.Com to issue an official statement regarding the incident, but are dragging their heels in doing so.

The school which pledges to ”eqip young people to be confident” now seems to be guilty of the opposite, and will be forced to explain their actions, or see their school officially labelled as racist.

One white student at the meeting, Lilyan Huckaby, told CBS 46 that she was “yelling and loud” at administrators but was not suspended.

“All the African Americans, they suspended them, and they didn’t suspend them,” she told reporter Hayley Mason, motioning toward the other white and Hispanic protesters.

Some parents of the Black students also told the outlet they were notified about their children’s suspension from sheriff’s deputies who visited their home. One mother even said a deputy pulled her over while she was driving to deliver the news.

Lekysha Morgan, whose three children were suspended, said she’s repeatedly complained about the “emotional distress” they’ve endured from being called racial slurs at the school. She said administrators have yet to take action.

“I feel the Confederate flag should not be flown at all. It is a racist symbol and it makes me feel disrespected,” one student who helped organize the protest, Jaylynn Murray, said.

“I felt really disrespected how the school didn’t do anything about it, and when we are not allowed to wear BLM stuff, and they are allowed to carry a racist flag around,” another added.

The NACPD were called last March to intervene in complaints of racial harassment, Newsweek reported.

The outcome of their interventionm does not seem to have produced much change.

There must now be alls for an inquiry into the school’s discriminatory policy, if at all it has any.