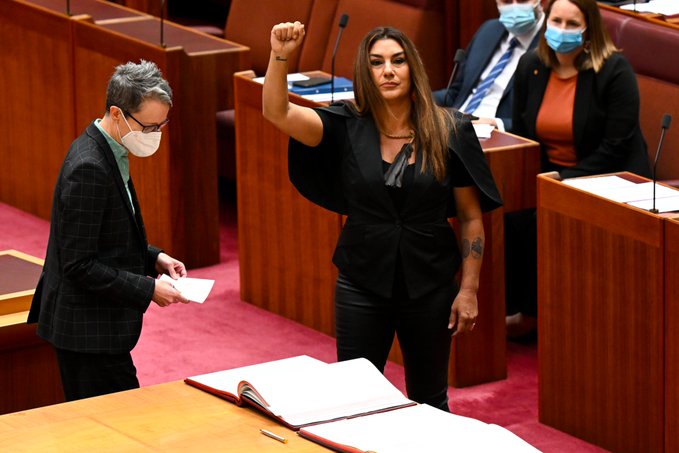 An irresponsible Australian politician pulled a publicity stunt by labelling The Queen a coloniser.

Greens Senator Lidia Thorpe pulled the stunt when at the parliament’s upper house with her right fist raised , she said  she would “bear allegiance to the colonising” monarch.

Queen Elizabeth, is also Australia’s head of state, and considered a colonising force on the indigenous population.

A number  of countries were involved in colonisation. The main European countries active in this form of colonization included Spain, Portugal, France, the Kingdom of England (later Great Britain), the Netherlands, Germany, and beginning in the 18th century, the United States.

Thorpe’s attack on the Queen is mainly because Queen Elizabeth is Australia’s head of state, and considered a colonising force on Australia’s indigenous people.

Her disrespectful attack on the Queen should have disqualified her from parliament. The senator would have been expected to raise any issues she has about colonisation as part of a political discourse or debate, not when being sworn into parliament.

“I sovereign, Lidia Thorpe, do solemnly and sincerely swear that I will be faithful and I bear true allegiance to the colonising, her majesty Queen Elizabeth II,” she said.

Senate President Sue Lines  then told Thorpe, an indigenous DjabWurrung Gunnai Gunditjmara woman, that she was required to recite the affirmation as written.

Thorpe is among Australia’s Indigenous leaders  who have been fighting to correct injustices suffered by their peoples since European colonisation began in the 1700s.

Thorpe last month described Australia as a “colonial project” and said the national flag did not represent her, yet is becoming a member of parliament.

Thorpe said she stood for parliament “to question the illegitimate occupation of the colonial system in this country”.

Colonialism  began with the “Age of Discovery”, led by Portuguese, and then by the Spanish exploration of the Americas, the coasts of Africa, Southwest Asia which is also known as the Middle East, India, and East Asia.

A number of countries affected by colonialism have called for reparations, but no practical coherent proposal as to how to achieve that goal, given the many countries that have a claim, has been presented.