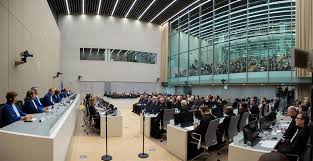 The international Criminal Court is considering investigating serious allegations of war crimes by the British military that include murder and torture.

The consideration follows Panorama programme suggesting serious allegations of a cover up into the alleged killings of civilians in Afghanistan and Iraq up by the  British government.

Leaked documents appear to reveal evidence implicating British troops in the killing of children and torture of civilians. The Ministry Of Defence has rubbished the claims as unsubstantiated.

A statement from the BBC on Monday morning read:

“The ICC said it would independently assess the BBC’s findings and begin a landmark case if it believed the government was shielding soldiers from prosecution,” the corporation said on Monday morning.

The court has previously concluded it was credible that British troops committed war crimes in Iraq related to the mistreatment of detainees. The year-long investigation claims to have found evidence of murders by an SAS soldier, as well as deaths in custody, beatings, torture and sexual abuse of detainees by members of the Black Watch.

A senior SAS commander was referred to prosecutors for attempting to pervert the course of justice, investigators claimed.