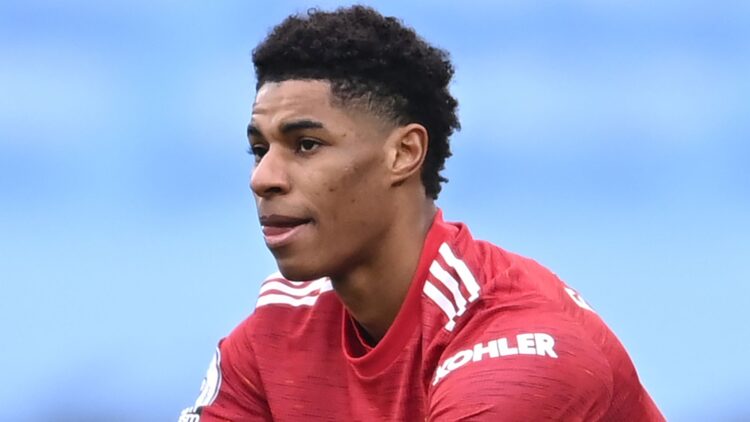 The inclusion of British footballer Marcus Rashford’s use of social media in the British crriculum calls for better clarification.

Exam board AQA have added the Manchester United and England player to the course from this month following his increasing profile and influence on a series of social issues during the pandemic.Marcus Rashford has won plaudits for his social justice campaigns, including tackling racism and launching a book club to improve disadvantaged children’s reading.

Marcus Rashford’s much-lauded use of social media to pursue his campaign against child food poverty and persuade the UK government to expand free school meals is to be studied by pupils as part of their GCSE media studies course.

Exactly how his use of social media will be academically beneficial to British pupils is unclear, but the idea appears to be driven towards the fight of racism after the England striker suffered racism in this year’s Euro championships after he missed a penalty in the penalty shoot out in the finals of the tournament.

The Manchester United player was distraught after being subjected to racist abuse and released a statement shortly after the tournament to apologise for his penalty miss, but said he won’t apologise for who he is.

From September, pupils studying AQA media studies will be able to learn about Rashford’s online presence and his communications on social media platforms, including to his engagement of  followers. It will also include his thoughts and battle with racism.

However, the scheme fails to explain how this will benefit pupils academically from an educational perspective. AQA has set up an expert group in equality, diversity and inclusion, to examine representation across the curriculum and assessments. Diversity and inclusion are all positive, but does little to tell us nothing about how pupils studying Rashford’s use of social media will help them academically or improve their understanding of media in the academic sense.

The footballer’s inclusion on the course is expected to motivate pupils, but it could also be seen as a  publicity stunt for the footballer who squandered his penalty, and was immediately subjected to an unacceptable level of racism by football trolls. Those faceless racists were widely and  rightly criticised by the British press, and most decent members of the public were horrified by the abuse.

Racism in football is nothing new, and secondary school pupils learning about Rashford’s thoughts about racism and how he uses social media offers no indication of how this helps the academics of a student wanting to get the most out of their education.

A glance at his twitter account reveals nothig academic or inspirational about his use of social media.  It highlights a successful award of his book ”You are A champion”, won the learning and development category in the Sainsbury’s children’s book awards. The fact the  mega rich footballer has written a  children’s book can be of educational value for primary school children. An 8 year old is pictured reading a copy of his book, but the educational value of that book to the young child depends on its contents and what the child actually gains from it.

G.C.S.E students on the other hand have nothing to gain from reading a children’s book, nor should their parents be excited that a chunk of their education is being committed to reading about a footballer’s use of social media or his thoughts about racism. The whole of society is aware racism is a bad thing- only the gutter minds in society howl racist abuse to footballers or anybody.

Sandra Allan, the head of AQA’s creative arts curriculum, said the footballer’s inclusion on the course would inspire and motivate pupils

“Marcus Rashford is one of the most influential and inspirational young people in the UK, so students can learn a huge amount from how he uses social media to make a real impact,” said Allan.

“It’s not just an opportunity for them to learn about social media – it’s also a great way to learn about important social and race issues as part of our commitment to equality, diversity and inclusion in the curriculum.”

Neither Ofqual nor AQUA- the exam board regulated by Ofqual have been able to explain how the new curroculum will benefit students academically or teach them about race issues.

When The Eye Of Medfia.Com called Ofqual to question them about the initiative, the press officer who answered the call avoided the question claiming to be in a meeting. That’s the regulator of the exam board not able to answer questions about a new curriculum by a baord they regulate.

Rashford’s social media campaign helped persuade ministers to provide free school meals for vulnerable pupils in England throughout the  the pandemic when pupils were at home during the lockdown.

In May, the footballer highlighted the racist messages he had received on social media after Manchester United’s Europa League final loss. 2020 final defeat to Italy but said he will “never apologise” for who he is after he suffered racist abuse on social media.

His efforts to help underprivileged children is good, butthis should be expected of every mega rich sportsperson.

The footballer and those masterminding the idea of inclding his social media campaigns in the school curriculum should ask themselves how it improves the education of the child, and how it improves their understanding of race. Ofqual and AQA have so far not made this clear at all.