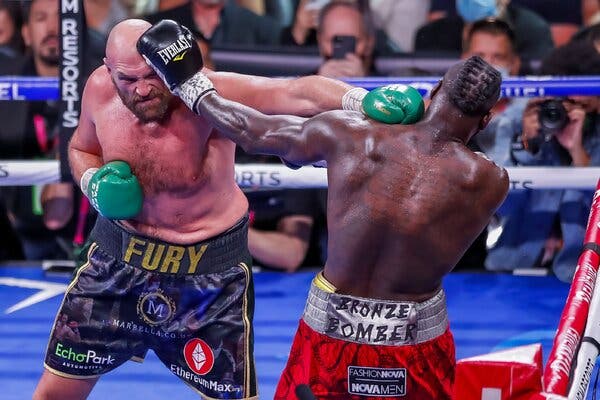 Tyson Fury produced the performance of his career by stopping former heavyweight champion, Deontey Wilder, in the 11th round of an epic battle even by historical standards of the toughest wars seen in the division.

It was a true battle for the ages,  one in which fans were graced with the sight of an action packed display  that saw these two combatants climb off the canvas  four times in total; each time to pursue their earnest determination of securing a famous victory. The fight and the associated sense of urgency was at a fast and aggressive pace, not often seen in heavyweight championship boxing.

Add to that the fact both men came in at their heaviest to date-Wilder at 17 stone, and Fury at 19 stone 7-  the rigour of the fight and the  accompanying venom behind the cluster of punches thrown made this box office event  a worthwhile one. Both fighters earned an abundance of plaudits fo the impressive display.

One would have to go back decades to find a trilogy that comes remotely close to the scintillating and gripping exhibition of strong will and endurance that transpired at the  T Mobile arena in Las Vegas.

Evander Holyfield and Riddick Bowe’s trilogy in the 90’s and Mohammed Ali and Joe Frazier in the 70’s produced some thrilling showcases, but none quite rivalled the depth of warfare Fury and Wilder found themselves engaged in on Saturday.

The allegations of cheating  levied against Fury  from Wilder, and Fury’s predictable anger about the unsubstantiated claims, no doubt contributed to the  burning fire that consumed both heavyweights in Las Vegas after the first bell went.

There was no messing around from either of the two  top tier fighters., both of whom brought a championship spirit to the party.

Right from the outset of this fight, it was clear both fighters were serious about dictating the fight. Wilder came out ushering sharp jabs and right hands to Fury’s body, and Fury responded with jabs and rights of his own.

When in the third round, Wilder hit the deck  after Fury planted a right uppercut on Wilder’s chin, spectators at the venue were beginning to sense a repeat of the one sided beating which occured in the second fight.

Instead, the next round saw the American clobber the gypsy king, sending him crashing to the canvas, only  for Fury to remind the viewing public about his incredible recuperative powers  which transcend the usual level of durability manifested by the tough guys of the division.

Fury got off the canvas, only to be sent  backthere again in the same round, in what appeared to signal like  the final blow to Fury’s dream to successfully defend his title this time. But again Fury, like the undertaker, rose up to continue  a battle he was psychologically committed to winning.

The Bronze Bomber from Alabama continued to be valiant in his assault on the gypsy king in the ensuing rounds, with Fury electing to fight ‘fire with fire’, with the momentum for an impending victory swinging from one man to the other in many of the rounds.

So intense and tangible was the suspense in each passing round, as deafening catcalls reverberated throughout the length and breadth of the auditorium.

Fury also used his bigger size to wear  Wilder down, dropping him in the 10th round, but  the highly durable American who defended his Wbc title 10 times before he met Fury the first time, continued to fight back with a winners mentality.

Fury’s magical moment came in the 11th round when a right hand sent his tough American opponent to the canvas, falling face down and bringing an abrupt end to proceedings. 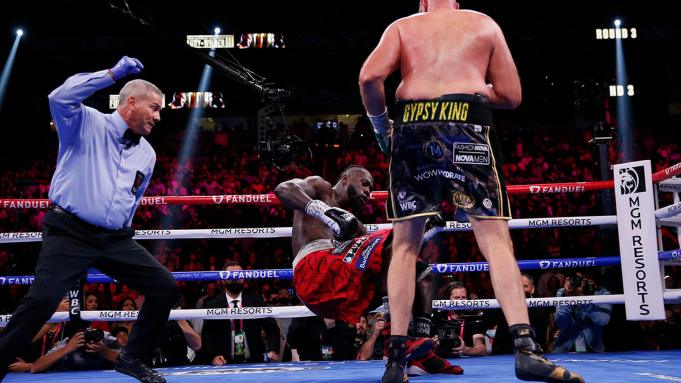 Fury had managed to successfully defend his WBC belt after riding a few scares,  but Wilder ‘s reputation as a fighter was enhanced even in defeat. It was a gripping heavyweight fight- the best witnessed by most boxing fans alive today.

“I’m now the greatest heavyweight of my era,” Fury claimed after the fight.

The curtain has  now been closed on the rivalry between the gypsy king and Deontey Wilder.

Two warriors gave fight fans a night to remember, though only one could emerge the winner.

”Only Fury could have put up with such an onslaught for that long, any other heavyweight would have been long gone, Shaun Murphy- a long time freelancer for Eastside Boxing told this publication.

Fury is no doubt the best heavyweight fighter in the world, followed by Deontey Wilder”.

It is unknown were Wilder goes from here, but after putting up such a good show, there will no doubt be plenty of opportunities for him. Losing to a man of Fury’s size, heart, and skill, is no shame.