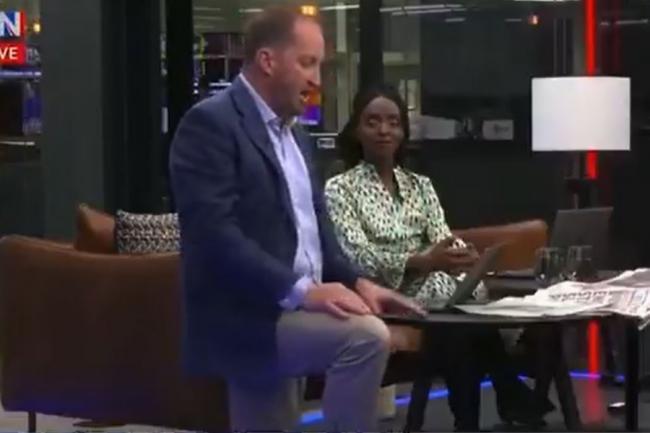 Data produced by the Broadcasters’ Audience Research Board (Barb),  has revealed  that no measurable audience was recorded between 1pm and 1.30pm on Wednesday, while BBC News and Sky News recorded 62,000 and 50,000 viewers respectively.

The data seen by The Guardian, reveals just how fed up its audience is with the gesture by the England football team done before matches in its fight against racism in football. Racist chants in football on certain occasions led to the gesture which attracted criticism from Home Secretary Priti Patel, who described it as gesture politics. Patel has since been criticized by footballers for her comments.

There are members of the public who share Patel’s view, as the audiences of the right wing GB News channel shows. Objection to taking the knee may even be much wider in society- only research can establish how people feel about it, and their reasons.

GB News viewers who pledged to stop watching the recently launched rightwing current affairs channel, making accusations that it had sold out and gone “woke”, secretly harboured Marxist values, or was in favour of Black Lives Matter.

The comments suggests the programmes viewers are against the fight against racism expressed by Black Lives Matters, though mixed feelings about BLM includes misconceptions by many people that the term implies that white lives don’t matter, when in fact all lives matter. Defenders of the movement say the term was established to address the common belief among African Americans that Black Lives were being treated like they don’t matter by racist police officers.

There is also a feeling among black professionals spoken to about the subject that those who oppose the BLM movement are either racist or unconcerned about racism, with white professionals who are no fan of the group simply stating they can’t identify with them, while  maintaining an anti racism stance.

Guto Harri and his GB News co-host Mercy Muroki  were speaking about the vile abuse during Tuesday’s show, during which Mr Harri said he ‘gets’ why footballers take the knee – an anti-racist gesture inspired by last year’s Black Lives Matter protests – before each game.:

He said: ‘I’ll tell you where I am. I’ve never understood why people would find it offensive. I can see and I tended to be one of those people that thought do we really have to do this at every football match, can’t we just enjoy whatever sport we’re in too?

Amid a Twitter backlash from social media users baffled by Mr Harri’s gesture on the ‘anti-woke’ channel, GB News publicly rebuked its presenter. It said on its official Twitter account: ‘GB News stands four square against racism in all its forms. We do not have a company line on taking the knee.

‘Some of our guests have been in favour, some against. All are anti-racist. We have editorial standards that all GB News journalists uphold. On Tuesday a contributing presenter took the knee live on air and this was an unacceptable breach of our standards.

‘We let both sides of the argument down by oversimplifying a very complex issue.’

Mr Harri defended his actions last night, writing on Twitter: ‘GB News is – above all – about free speech; having the debates others won’t. English footballers have made it clear that when they take the knee they are making a clear statement about rejecting racism (not endorsing the narrow divisive aims of BLM). I support them.’

GB News viewers are clear that they don’t want the channel going woke or supporting black issues, but have not and cannot say they are against the fight against racism. If they did, it would look bad on the channel which would instantly lose credibility if it were openly endorsing racist sentiments.

On Thursday night the channel tweeted: “GB News stands four square against racism in all its forms. We do not have a company line on taking the knee. Some of our guests have been in favour, some against. All are anti-racist. We have editorial standards that all GB News journalists uphold.”

However, it then also tweeted: “On Tuesday a contributing presenter took the knee live on air and this was an unacceptable breach of our standards … We let both sides of the argument down by oversimplifying a very complex issue.”

GB News  initially attracted strong audience figures when it launched last month, with hundreds of thousands of people tuning in for its much-hyped first night.

Andrew Neil, the channels main man, has taking leave on holiday to his main residence in the south of France but there is no public return date for his flagship 8pm show.

Neil’s position on the entire knee debate is unknown, and he would rather keep it that way. The debate comes with views  loaded with implications those involved may not even see at the beginning of their involvement.

The appalling racism expressed on social media against the three  black football players after they missed their penalties shows just  how serious racism can be in our society, making it worth fighting against. The vast majority of the British public are decent human beings who do not stoop that low, but as someone said to me, it sometimes takes extreme circumstances to bring the worst out of certain people.