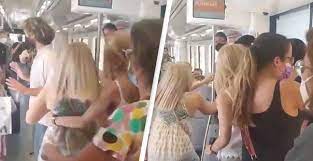 Circulating footage filmed in Spain shows angry passengers pushing a man around a train carriage and throwing him off the train  onto the platform for not wearing a protective face mask.

The man had apparently been vocal on the train about the dangers and  side effects of wearing masks for too long, as he criticized world governments handling of the pandemic, claiming that the entire pandemic has been exagerrated by powerful elites to control the world.

A rise in COVID-19 cases in the last month has prompted  the Spanish authorities to impose new restrictions in the country, sparking high levels of precautionary levels by the public and rising levels of intolerance to anti restriction measures.  Some passengers pointed out that a rise in  Barcelona and the surrounding region of Catalonia has led to plans for the  imposition of  a nightly curfew, to keep members of the public at home, but the man was unsatisfied with the explanation, irritating other passengers listening in.

The use of face masks in Spain is mandatory for anyone over the age of six on all forms of public transport, and applies to any enclosed space open to the public, and all areas outdoors where social distancing of 1.5 metres cannot be observed.  The rules were not enough to stop the man being vocal without a mask, prompting passengers to feel endangered by the fact he was speaking vociferously, with some saliva shooting out of his mouth,

In the footage, shared on Twitter,  and viewed thousands of times, passengers can be seen objecting to the maskless man, as they pushed him towards the door. More than one passenger became committed to the course of pushing him out, and he eventually

The man co-operated with their forceful removal of his presence from the train, judging this to be his safer option as he a went to sit on the platform. Sources from Spain who brought the story to the attention of The Eye Of Media.Com, said the man was later spoken confronted to inquire what his protest was about

The video viewed thousands of times on Twitter, has been shared and used for entertainment . Masks was been a controversial topic at the beginning of the pandemic, but has since been widely accepted, with any associated controversies falling by the way side.

He said wearing a face mask may give a false sense of security  because it is designed to protect other people, but people think it is protecting them. He said he believed masks are a money making scheme, and pointed to Poland where he  said the president has made a law for people to only buy masks from the country, saying that the presidents relative has a massive business selling masks.

Under guidance associated with mask wearing, people are advised not to touch their masks,  and to change their single-use masks frequently or wash them regularly, dispose them correctly and adopt other management measures, otherwise their risks and those of others may increase.