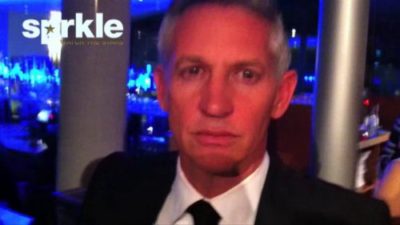 Gary lineker’s heart is right but his thinking is wrong. His motive in speaking up against the dental checks for refugees is to prevent refugees  from feeling humiliated in their journey to a new life to escape the horrors of war.

It will be embarrassing for every refugee who has a technological equipment used on his teeth to assess his or her age.

However, the news that a refugee who came into Britain claimed to be 18 despite appearing 38, was revealing. It showed the level of desperation felt by refugees caught in war, to desperately enter Britain, or any country that offers them more hope.
Hope of a better life in the UK is indeed here for refugees, but not for all. There has to be a cut-off point, that sets reasonable and sensible limits. This is why quotas for various countries to take in refugees, has been set.
If Britain has set a quota for only children refugees to be allowed in from a certain country, the reason is to prioritize children over adults, since everybody cannot be allowed in. In that sense, if there is a good reason to believe that some of these refugees may fake their ages, there is nothing wrong with the suggestion of dental checks.The checks are to establish the truth. Provided those conducting the checks do not behave in a degrading or condescending manner, the idea is not a bad one.
Those performing the checks will do so with children who do not appear to be the age they claim to be. It will be best not to have to conduct the checks on those who are obviously young enough to be a child or teenager. Where there are doubts, the checks should be conducted.

So, why is Gary lineker getting stick for showing a good heart? Well,his heart is right but his thinking is wrong, as stated. His response that anybody who criticises him must be racist, is a bit off the mark. They differ from him, and are entitled to do so. The British public has a right to insist that people do not come into this country illegally, and that we can control the numbers coming in. This means that we as a country are willing to accommodate refugees escaping the the hell of war and living in crisis, but only those allowed to be here should be here. An argument may exist for even more people to be allowed here, but that argument must be made in the context of discussion for political debate.That’s the process. We can’t rely on records from other countries unless we are absolutely sure the information can be verified from reliable sources. Gary lineker’s condemnation of plans for dental checks is mistaken, but the torrent of abuse he has received on social media is on called for.
Gary lineker is rightly fighting for tolerance, not a bad thing in itself. But tolerance must not be turned into stupidity. It will be wonderful if Britain could accept all refugees, but this is not practicable. Every country must have sensible limits which should not be exceeded. A state of human crises calls for our  deepest compassion. However, this compassion must be shared by other countries, so that we don’t take on our hands than we can cope with. Gary lineker was a great sportsman for British football, and has become a recognised commentator with the BBC for years now.
He can use his position to express concerns about anything in society, but asking for Britain to let in refugees without checks, just does not go down well. People should be able to ask for checks without being branded as racist because racism does not come into this at all.Those who are outraged with Gary lineker’s comments have every right to be disappointed with his judgement, but not to become rude.
One tweet from an angry social media user suggested that the match of the day host provide some rooms for refugees in his penthouse. That was funny, though nothing stops Gary lineker from actually renting a house for some of these refugees, fully paid for a year, with luxurious furniture in there. That may show his heart to be really where his mouth is. In reality, Lineka has done nothing wrong except to get his thinking wrong.
Spread the news