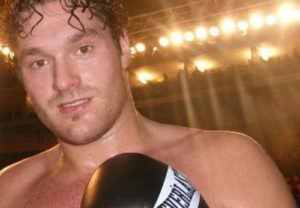 Tyson Fury’s promoter, Frank Warren, has put to bed some of the senseless talk that has recently been coming out of the mouth of his charge, Tyson Fury.

Speaking to the Independent, Warren made known his plans to get Tyson Fury 4 fights in 2018. Fury said “He’s lost weight, about five stone and looks great. His mindset is right, he’s ready to go. The name of the game is to keep him busy. We will get him out, fighting regularly”.

“We will aim to get him out 4 times in the first year back.” The idea that Warren will get Fury fighting 4 times this year seems ambitious, but this is how regularly heavyweights should fight to achieve good ring experience. The goal is achievable if Warren and Fury stick to a good plan.
“It’s a fight everyone wants to make”.

Fury recently gave the first indication he would not be ready to fight Joshua in 2018, when he insisted on a 60/40 purse split in his favour, an impossible demand even the boxer himself must have known will never happen. Warren set the record straight that he will be seeking an even split to make the fight eventually happen, but expressed the need to get Fury ring fit first. The idea of getting him in the ring 4 times this year is wise and will provide a lot of entertainment for boxing fans.

Fury will not be allowed to fight bums for his practice fights, as a former world heavyweight champion, he will need to fight some decent names.

“I don’t care how it’s done, let’s just get it done and get it on. When it comes to the split-do you know what-all that bull**** is irrelevant. You’ve got two guys-let’s just put it straight down the middle 50-50.”

A 50-50 split will work if Fury wins all his four fights. Opponents linked to Fury’s come back plans include former world champion, 44-year-old Shannon Briggs, and tough Johann Duhaupas, who took WBC world champion, Deontey Wilder, 11 rounds when the pair met in 2015. If David Haye wins his rematch against Tony Bellew in May, that will be a good name to add to Warren’s list, for monetary value.

Haye pulled out twice against Fury due to injury in 2014, and with both men suffering career setbacks, Fury v Haye would be a good clash for the sport down the line in 2018. If Bellew beats Haye again, his name will be thrown into the hat for one of Fury’s 4 opponents, but Fury will be expected to beat him, no matter how impressive he is against Haye in a second victory.

Four fights for Fury before meeting Joshua will mean the pair will be meeting in the summer of 2019 as Fury himself suggested in a recent tweet. However, if Fury is truly as confident as he has been talking, he should be fighting Joshua on his 4th fight, towards the end of the year