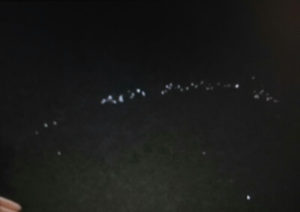 A formation of UFOs seen in Rockland California has made the news after passer-by were freaked out by the sightings.

The formation UFOs  formed a ring  of lights in a perfect semi-circle formation of lights, about a mile in diameter. Unlike many UFO’s that are often mobile and hovering about in the air, this formation of UFOs was reflected in a static saucer shape of visible lights, looking like stars but too close together in a perfectly curved shaped line, and different from the stars we know. They were posted on several Facebook pages. The sightings made it to the KCRA 3 news .

California has experienced a number of UFO visitations in recent years, so the concept of UFOs is not alien to Californians at all. However, it doesn’t make the citing any less strange each time they appear.

Secure team10 featured another sighting of UFOs, this time, seen in Phoenix, Arizona, operating controlled maneuverers.  The  lights were moving in a sequential  and triangular formation, flashing their bright lights on and off, whilst dramatically disappearing and reappearing in an organised manner, displaying signs of an organised level of intelligence in their operations.

Spectators filming the appearance uttered obscenities in an expression of shock reaction, as the bright flashing objects danced and hovered around the air in an amazingly startling fashion.  The footage was featured on the Los Angeles NBC news, as a panel speculated on what else the objects could be.

However, the view of the extra-terrestrial, as featured on footage received by youtube channel, secure team 10  is clear enough to see from the sky- line that this was an extra -ordinary citing, consistent with millions of citings reported world -wide this year alone.

UFOs continue to intrigue and amaze us because of their unidentified origin and purpose. There has been speculation that they may be from Mars or some other planet, but there is no evidence to support this. Mars is already the subject of a number of space missions in search of life on mars, but Rover cameras have already spotted structures on mars. Pictures of Mars reveal rocks, damp soil, and a clear blue sky.

The U.S senate, only last Saturday gave out $19.2 bn to continue to investigate Mars. Tyler from secure team speculates that Mars was once inhabited, and investigators want to find life there, ideally human looking life.   Ancient looking faces are said to have been seen on mars, including mountains on mars. However, many observers believe NASA are keeping certain information  they may have found on mars secret. Expert pictures are currently being taken on mars by express crafts investigating mars.

However, the UFOs were seen in California and Arizona, once again  highlights the awesome presence of intelligent life out there, yet to be fully discovered in terms of their full identity, origin, and purpose. Why they are appearing so often in diverse parts of the world, is fascinating and intriguing. The fact their purpose is unknown also raises the urgency for them to be fully investigated and understood, for our own good.