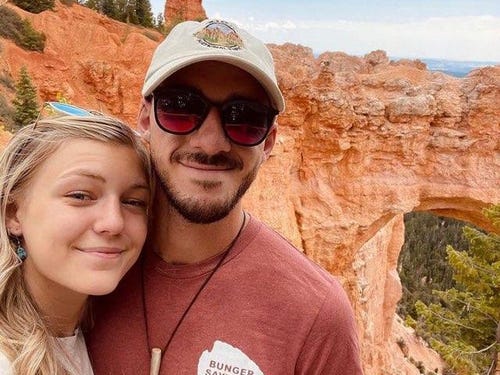 The fiancee of missing Gabby, Laundrie’s  decision not to talk to the police has sent alarms bells ringing in the latest mysterious story of a 22 year old girl who suddenly vanished after a trip abroad.

The family of Gabby Pipeto  have urged online trolls not to target her fiancee , who  went on a trio and came back without him, as they call for wider co-operation with police in the search for their missing relative.

But the revelation has gripped America because of the eerily classic  story line of a missing persons investigation in the context of a romantic trip gone wrong.

Gabby Petito, a 22-year-old “van life” YouTuber, and her fiancé, Brian Laundrie, set out from New York in a white converted camper van on July 2, and Gabby seemed to be having the time if her life.

The pair visited national parks across the U.S, but  Petito’s family reported her missing on Saturday after they never heard from her again after weeks.

The fiancé of the New York woman who went missing on a cross-country road trip chose  to  hire an attorney rather than present their man for an expected conversation with police in these kind of serious circumstances.   His family also declined calls for  him speak to investigators about her disappearance.

Gabby Petito, a 22-year-old “van life” YouTuber, and her fiancé, Brian Laundrie, set out from New York in a white converted camper van on July 2, her family has said.

The pair visited national parks across the US, including in Colorado and Utah. Petito’s family reported her missing on Saturday. They were deeply worried about her safety.

She was last seen checking out of a hotel with Laundrie on August 24. Petito’s last known location is believed to be Grand Teton National Park in Wyoming.

Mr Laundrie returned alone to his home to North Point, Florida, after a trip away, offering no explanation for the whereabouts of his  missing fiancee_ the woman he wanted to be

When one would expect the family of Laundrie to have been most supportive of the police investigation, they  instead gave police a contact for their attorney.

On Tuesday afternoon, the family’s attorney Steve Bertolino released a statement saying: “This is an extremely difficult time for both the Petito family and the Laundrie family.

“I understand that a search has been organized for Miss Petito in or near Grand Teton National Park in Wyoming.

The couple  had been documenting their trip across the United States on their YouTube channel  Nomadic Static, but fears grew for Ms Petito’s safety after she failed to contact her family for weeks.

Laundrie’s action raises suspicions of foul play, after he returned  from a trip without her under mysterious circumstances, but there is so far no evidence linking him to any crime inGabby’s disappearance. Cops are eager to find out what he knows.
One  possible theory  given anonymously  to The Eye Of Media .Com by some U.S police kept all possible lines of inquiry open.  ” One theory  is that the missing girl  may have come to harm caused by another party , or may have been driven to suicide, the female cop said. There is also the obvious immediate suspicion, but all scenarios call for  answers to what Laundriencame returned home without  without Gabby”

Police have seized the white van the couple used during their travel as part of their investigations.

Gabby’s mom Nichole Schmidt said she received texts from her phone until August 30 but couldn’t say for sure that the messages a actually came from her.

Gabby had announced on social media  that living out of the van “was the best decision” the couple had ever made. There are now fears it may have been the worst decision .

The couple  started a YouTube channel called “Nomadic Statik” where they shared their journey with fans. The pair visited Colorado Springs and many national parks in Utah but left the state due to the risk of wildfires.

They also planned to visit Yellowstone National Park but never made it.

Dad Joseph described his daughter as “free-spirited” and said she loved adventures.

How far the love of experiences has contributed to her fate is a burning question for  police in these worrying moments for the family of Gabby Petito.