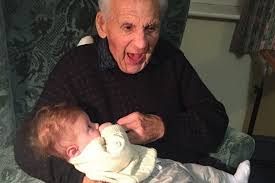 The story of great-grandfather, Jimmy Well, who died at the exact time and date he was born 103 years ago, is remarkable fate

Jimmy Newell- a World War Two computer pioneer- died at 12 noon, exactly 103 years after he was born. He was born to the sound of bells ringing at Leeds Town Hall at midday on October 11, 1913.

How it is possible for a man to die at precisely the moment of his birth, is very strange. The story calls special attention to the notion of fate, and the possibility that our lives are mapped out, or at least, some people lives are mapped out. The coincidence in the timing of Newell’s death seems so extra- ordinary to comprehend. There must have been a specific reason Newell died at precisely the same time he was born.It gives a sense of purpose and predestination to his life. 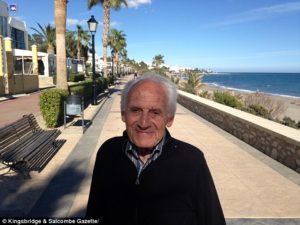 The real question is why an experience like this would happen to him and no one else. Or perhaps it has happened to a few others, without this being publicized. It may just be that Newell was a special man with special qualities, being rewarded by the mysterious powers of karma.

Dying on the same day he was born is already peculiar, but when the timing of death includes the timing of his birth, one has to say that the life of this man may have something unusually great about it.
Jimmy Newell was a world war 11 computer pioneer who was very influential in the computerization of the bank industry. Newell is also believed to have been responsible for the first hole in the wall cash machine in London , invented by John Shepherd-Barron.
In that sense, he was a special man, though not particularly famous. Certainly, he was well accomplished in life. There are many great people who are not known or famous. Greatness can take many forms, and includes the qualities of an individual’s heart and principles in life. This man contributed his bit to mankind.

Jimmy’s 65 year old son, Graham, who held his father’s hand as he died said his father never short changed anyone. He believes his father was determined to see his 103 rd birthday.
”My father certainly died holding my hand at exactly midday on his birthday while I was on the phone to my son.
I told my son he had just died and we checked the time – and it was exactly 12 noon to the minute. It was on the dot.
My belief is that it was deliberate as he would never short-change everyone.
He really wanted to be 103. He had an amazing determination and I genuinely believe that was what he wanted”.
Graham pointed out that his father had suffered a fall 16 days earlier at his home in Brighton. He was taken to Torbay Hospital for a hip operation, but was never going to return home. Sometimes fate has strange twists that occur to bring the process of fate to completion.  Jimmy Newell was an old man, and may have fallen trying to be strong and walk about independently, even at his very old age of 102 at the time. Jimmy Newell lived on his own, making it a wonder why nobody lived with him.

A moving tribute to his grandfather was written by his grandson, Andy, who wrote  ”on this day in 1913, Newell drew his first breath, and today at noon his last.
A celebration of his life is planned for Thursday,November 9, and the eye of media.com will be there to acknowledge and celebrate his life with him. May his soul rest in perfect peace.
Spread the news