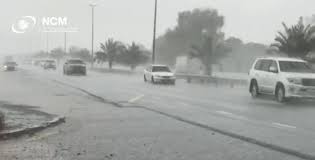 Dubai has paid $15 million (£10.8 million) towards nine different rain-enhancement projects, part of which was given to the University of Reading, who are behind the creation of the weather-controlling drones.

Dubai Has Invented Fake Rain To Battle its 50° heat wave which is causing sweltering conditions for its inhabitants and tourists wanting to enjoy the summer without having to endure its severe heating conditions.
Dubai has successfully made its own fake rain in a bid to tackle the city’s scorching temperatures.

The United Arab Emirates (UAE) has an average rainfall of just four inches, and often sees temperatures up to 50°C, so the Middle Eastern country has turned to technology to help change this.

It was recently announced that the UAE had funded a project that would see drones being able to control the weather, and from the looks of recent scenes in Dubai, it’s worked.

Other techniques involve dropping salt or other chemicals into clouds to encourage precipitation.

Some studies have shown that it may be able to increase rainfall by up to 35% although other academics question its effectiveness.

Cloud seeding has also been in used in other drought-prone countries including China and India.

It can also be used to prevent rainfall, and stop potential flooding, as seen in Jakarta, Indonesia.

The enhanced rain is created using drone technology that unleashes electrical charges into clouds in order for them to clump together and form precipitation.

The National reported the heavy rainfall caused waterfalls to appear in the city of Ail Ain and made driving conditions hazardous.

In an effort to curb the country’s sinking water table, the UAE invested $15 million in nine different rain-making projects in 2017.

The current system being used to change the electrical charge of the clouds is being led by researchers at the University of Reading in England. Professor Maarten Ambaum, who worked on the project, told the BBC in March that the UAE has enough clouds to create conditions conducive to rain.

The project tries to get the water drops to merge and stick when they receive an electrical pulse, “like dry hair to a comb”.