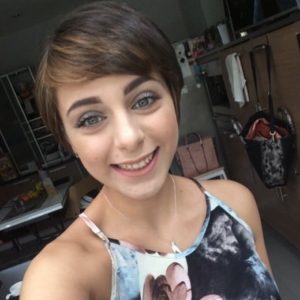 Channel 4 will broadcast a short film about the refugee response in Greece, created by a student from Enfield.

The broadcast to be aired tomorrow on Channel 4 is a boost to the hopes of all film students, who wish to have their work commissioned by a broadcaster. Law of the Sea is an animation that narrates the story of how fishermen on the island of Lesbos, Greece, have been tirelessly helping to rescue refugees from the Mediterranean Sea.
The 21-year-old freelance animator and filmmaker from Enfield North London, Elmaz Ekrem,who studied BA (Hons) Animation at the University for the Creative Artstook 7 months off to create the short film. He created the film alongside Dominika Ożyńska.

“This film is about the war in Syria and the humanitarian crisis it has created, Ekrem told the eye of media.com. “This subject matter is something that everyone should know about. When an act of war is broadcast as a news story, or the image of another drowned innocent child goes viral, it is so easy for a nation to become spectators to a situation that they should be actively helping.

“Our film takes on a unique viewpoint, letting the voice of people who have taken on this responsibility of rescuing refugees be heard, Ekrem statedThe fishermen that we interviewed are not trained coastguards, but normal people like you and me who get up and go to work each day in order to provide for themselves and their families.

The Enfield pair stress the point that governments do not come together to help solve the refugee crisis, but ordinary people who go out of their way to help their fellow man. This point is not fully accurate because many governments including the UK have got involved in helping refugees in Syria, with many countries debating what the fair share of refugees each country should take on.The point Ekrem probably means to make is that not enough ordinary people help refugees, though a relevant question is whether ordinary people have enough time to help refugees, given their own personal burdens.

Dominika expresses shock and disappointment that she did not see fishermen offer any assistance to refugees.  Dominika told the eye of media.com “When I went to Lesbos I was shocked that none of the fishermen or local people questioned whether to help refugees or not. The crisis affected them directly and turned their lives upside down. They still accepted it and did everything they could to help those that were coming to the island.

“I think it’s important to show people this perspective – one of unconditional help and support for those in need, Dominika states with strong conviction.  Because for me, it’s not only the law of the sea, it is a universal law – if someone needs help, you help them. It’s easy to forget about it when the issues seem far away.”

The animation which took a total of seven months to make and, upon their return to the UK, the students selected the most telling interviews to use for their short film.

The film will feature in the Channel 4 show Random Acts, which showcases short films chosen for their bold and original expressions of creativity. It will be a real boost for the student’s CV, with more opportunities to come.