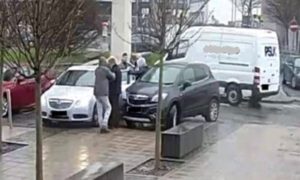 The release of CCTV images that reveal a murderer being freed by his mates is embarrassing.

Bad boy, Shaun Walmsley, was freed from his sentence after two men armed with a gun and a knife ambushed prison guards outside Aintree hospital in Liverpool at 3.05pm on Tuesday.

The gangster ambush is a disgrace to the prison security services who should have enough life experience to know this type of thing can happen. It’s not the first time a murderer has escaped jail.

Prison guards accompanying convicted murderers should be heavily armed themselves. In fact, they should also be accompanied by armed police.

The news shows the alarming failing in a system that should be much smarter in a world in which police use intelligence to catch criminals.

They should apply similar intelligence gathered from experience to prevent embarrassing failings of this magnitude.

The CCTV images showed Walmsley standing between two parked cars in a huddle with his hooded accomplices.

Walmsley , nick named ‘highly dangerous’ was a top drug dealer who ran a nationwide crime network, and was serving a life sentence with a minimum of 30 years at HMP Liverpool for the murder in May 2014 of Anthony Duffy.

Duffy was lured to a street near Aintree racecourse and repeatedly stabbed.

For a man as dangerous as Walmsley, one would have thought extra precaution would have been taken to prevent any possibility of escape, especially as prison escapes are nothing g new.

Yet, he was able to successfully plan an ambush so well and successfully.Det Supt Natalie Perischine said:

The mayor of Liverpool, Joe Anderson has asked the home secretary, Amber Rudd, to review security arrangements around category A prisoners(prisoners whose escape is highly dangerous to society) making scheduled hospital visits.

Too little too late. The Mayor should be making specific recommendations, not just asking for a review.

Further, this type of review should have been done a long time ago.Wamsley has been free for three days now and is someone probably laughing and having a few drinks and some spliff.

He will lie low for as long as he can whilst getting as high as possible behind closed doors.

Shame on the prison services and a flawed system. Looks like the criminal had better planning acumen than the prison guards.