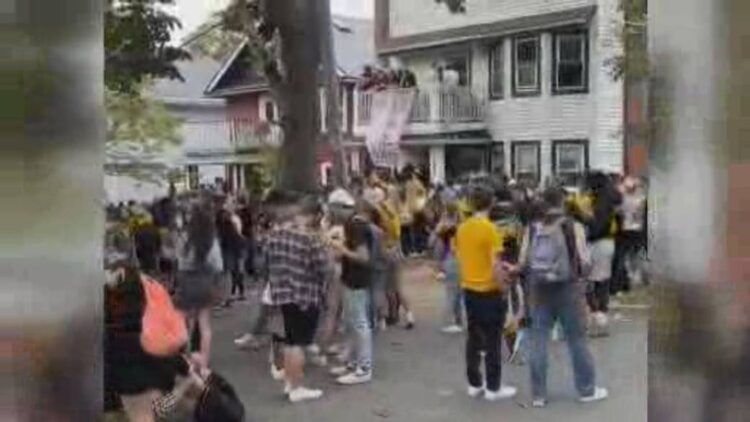 There was drama on Canadian campuses after several students  were arrested for drunken behaviour and breaches of Covid-19 regulations.

Halifax Regional Police had a busy night breaking up a massive downtown street party, after a flood of complaints came from neighbours in a residential street near Dalhousie University.

Social media posts show crowds of young people on Jennings Street on Saturday evening. At one house, a large banner hung from a balcony read ‘Relax we are double vaxxd (sic).’

Students bragged about their attendance of parties over the weekend in breach of Covid-19 rules, but the arrests have formed a big part of discussions at campuses this week.

Arrests were inevitable after  thousands of post-secondary students packed the streets in Guelph, Ont., London, Ont. and Halifax on Saturday, breaking liquor laws, COVID-19 restrictions and in some cases.The school has also urged  any students who attended the parties  not to attend classes or on-campus activities for one week, beginning immediately and continuing until Oct. 4.

Students are also being asked to limit their interactions in public spaces and get tested for COVID-19.

Hundreds  of revellers attended a party in the Jennings Street area on Saturday afternoon, and Halifax police estimated that thousands attended another party in the same area that night.
The university described the gatherings as “reckless, dangerous and disruptive” and said no one should be made to feel unsafe in their own home.

“Enjoy the fines & upcoming academic discipline hearings you rightly deserve,” Guelph mayor Cam Guthrie tweeted last Saturday, but students have continued to brag about the fun they had at the parties.

Halifax city councillor Waye Mason blamed the high number of first-year students as a result of the number of high-school graduates who deferred post-secondary studies amid the pandemic.

In a news release, Dalhousie University admonished those who attended what it called an “unsanctioned” and “illegal” event, urging them to get tested for COVID-19 and “not to attend classes or general on-campus activities for one week.”

“Dalhousie currently has an on-campus dry policy. You’re also not allowed to have visitors in residence,” Madeleine H. Stinson, president of the student union, told CTV National News. “We know students were going to party and Dalhousie created it so that they couldn’t do so on campus.”

“Many of you showed complete disregard for the surrounding neighbourhood and for laws and bylaws around noise, open alcohol and public intoxication,” the statement said.

“With first aid and arrests reported, you put strain on first responders already at capacity due to the current pandemic.”
The school is strongly urging any students who attended the parties to not attend classes or on-campus activities for one week, beginning immediately and continuing until Oct. 4.

Students are also being asked to limit their interactions in public spaces and get tested for COVID-19.

Meanwhile, Halifax police are investigating the events of the weekend and said it could result in charges. Dalhousie has also threatened to fine or even to expel students who participated in the party.