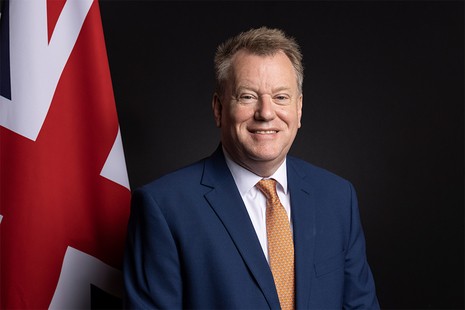 The protocol, which is a special Brexit deal agreed for Northern Ireland to prevent a hard border on the island of Ireland.

Frost was addressing diplomats in Portugal on Tuesday,  when he described his new legal text as “a better way forward”.

Frost hailed his forward-looking proposals as constituting an improvement on the current “excessively rigid” protocol, and would allow the EU and UK to “get back to normal” by removing “the poison” from their relationship.

Unionists dispute this, arguing that it undermines Northern Ireland’s constitutional position in the UK and creates a trade barrier.

The standoff between the Uk and The EU over the Northern Irish boarder has been going on for a long time.

The EU is  expected to present proposals on Wednesday to solve the state mate over the Brexit divorce deal, but Lord Frost wants the block to behave reasonably and accept his proposals, but EU chiefs will first need to scrutinize the details before committing to anything.

“We have a short, but real, opportunity to put in place a new arrangement, to defuse the political crisis that is brewing, both in Northern Ireland and between us,” Lord Frost said.

Lord Frost urged the European Union to carefully examine the UK’s new legal text, stating that the existing protocol was unworkable because it did not have support right across Northern Ireland.

He also warned that the UK could still trigger Article 16 – which allows either side to effectively override large parts of the agreement – if the EU and UK do not agree on changes to the existing protocol.

“Northern Ireland is not EU territory. It is our responsibility to safeguard peace and prosperity and that may include using Article 16 if necessary.

“We would not go down this route gratuitously or with any particular pleasure but it is our fundamental responsibility to safeguard peace and prosperity in Northern Ireland and that is why we cannot rest until this situation is addressed”.

It is in the best interest of both The UK and The EU to agree a deal to avoid further tension.

U.S president, Joe Biden, has also stressed the importance of The Good Friday agreement being honoured as part of the Brexit deal.