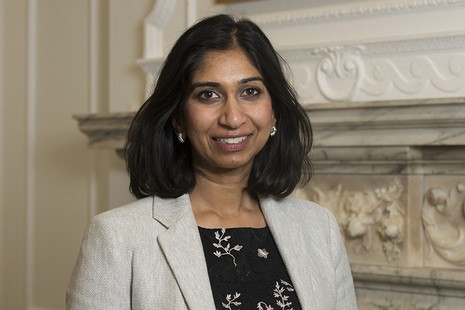 The attorney general has claimed it is legal for schools to refuse to use trans children’s preferred pronouns and ban them from using the toilets or uniform of their stated gender.

However, a headteachers’ union accused Suella Braverman of “muddying the waters”, with schools still awaiting official government guidance on how to approach issues of sex and gender.

In an article for the Telegraph, the minister claimed “many schools and teachers” believed they had “an absolute legal obligation to treat children who are gender questioning according to the preference of the child”.

But she said any decision to “accept and reinforce” a child’s transgender status should only be taken “after all safeguarding processes have been followed, medical advice obtained and a full risk assessment conducted, including taking into account the impact on other children”.

“I hope that understanding the law will free schools to act in each and every child’s best interest rather than being driven by a misunderstanding of legal duties.”

Writing in The Daily Telegraph, she said schools should only affirm the gender preference of a child where it differs from their birth sex “upon the advice of an independent medical practitioner”.

She added: “Many schools and teachers believe – incorrectly – that they are under an absolute legal obligation to treat children who are gender questioning according to the preference of the child.

“I want to make it clear that it is possible, within the law, for schools to refuse to use the preferred opposite-sex pronouns of a child.”

Commenting on her remarks, Stonewall charity said providing a learning environment where trans children and young people’s wellbeing and dignity is taken seriously “should be a priority we can all agree on”.

In her article and a speech to the Policy Exchange think tank, the attorney general said it was lawful for single-sex schools to refuse to admit pupils of the opposite sex who identify as transgender.

She also said it was legal for mixed schools to refuse to let trans girls use girls’ toilets or dormitories, wear a girl’s uniform or participate in girls’ single-sex sport.

Schools can also “refuse to use the preferred opposite sex pronouns of a child”.

She added that  pupils should “not be punished for refusing to adopt a preferred pronoun for a gender-questioning child in a case where the school has decided to affirm a child’s preference”.

Schools that “socially transition” a child without the knowledge or consent of parents or medical advice increasing their “exposure to a negligence claim for breach of their duty of care to that child”, she added.

Sarah Woosey, an education law expert at Simpson Millar, acknowledged the equality act “does not expressly say that schools must automatically recognise someone under the gender which they identify as”. But she added that “similarly it does not say that they cannot”.

“Furthermore, one would question how a school could comply with their duty to not discriminate against a child if they simply refuse to acknowledge a child or young person’s gender identity rather than gender at birth.”

Braverman’s comments focused on what she described as “misinterpretation” of the 2010 equality act, which states that both biological sex and gender reassignment are protected characteristics.

Under the act, the characteristic of gender reassignment applies “if the person is proposing to undergo, is undergoing or has undergone a process (or part of a process) for the purpose of reassigning the person’s sex by changing physiological or other attributes of sex”.

But Laura Berman, partner at Stone King, said “at no point in the act does it say that it only bites when medical advice is received”.

Stating schools could refuse to allow trans children to wear the uniform or use the toilet of their stated gender was “not my reading of the equality act.

“On my understanding, there is nothing in the act that allows schools to delay acceptance of a child’s transgender status until medical advice is obtained, a risk assessment is conducted or the impact on others is taken into account.”

Schools navigated difficult territory ‘for years’
Braverman made several other claims in her speech, including that “ideologies” that distinguish between sex and gender are “being taught in some schools without any democratic scrutiny or consideration of the consequences”.

She also claimed that a primary school teaching year 4 children words and phrases such as transgender, gender dysphoria or queer would be “falling foul of government guidance”, though it is not clear what guidance she was referring to.

Schools that teach four-year-olds “that people can change sex or gender” would also be breaching their impartiality duties, she claimed.

Geoff Barton, from heads’ union ASCL, said Braverman’s comments seemed to “muddy the waters rather than provide any clarity”.

Schools had been “navigating this difficult territory on their own for many years making decisions which serve the best interests of all their pupils”, he added.

“She says that any decision by schools to ‘accept and reinforce a child’s declared transgender status’ should only be taken after medical advice is obtained and a full risk assessment conducted. Is this official government guidance to schools?

“Nobody knows because the government has still not actually consulted on or published any guidance.”

“What they really need now is clear legal guidance from the government so that they can feel confident in the decisions they take. Until we have that school leaders will continue to be placed in an extremely difficult position.”

Other leaders on Twitter criticised the government for using school pupils to fight their culture wars.