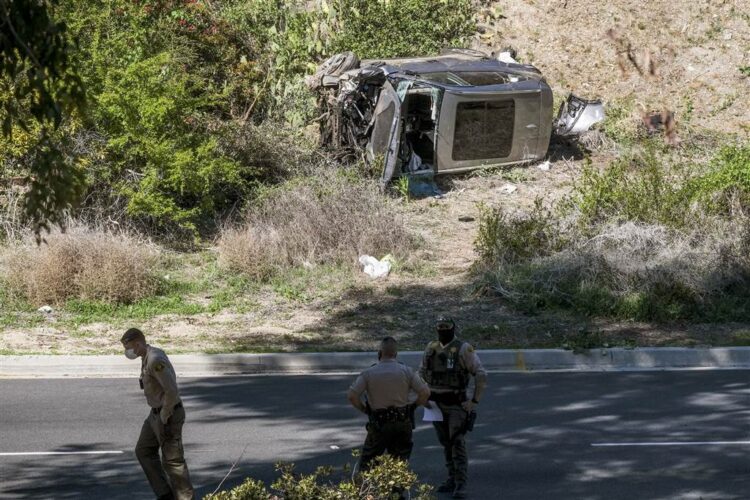 Tiger Woods was undergoing surgery on Tuesday for non life- threatening injuries including a compound fracture and a shattered ankle after crashing his car en route to a Los Angeles golf course, to film for GolfTV.

The 45-year-old golfer was driving alone near Rancho Palos Verdes when his Genesis GV80 crossed the central reservation and flipped over at 7.12am, rolling ‘several hundred feet’,  and careered up an embankment before overturning in Rancho Palos Verdes, near Los Angeles, California.

He was rushed to Harbor-UCLA Medical Center – the nearest hospital – where he is now undergoing surgery to correct ‘multiple injuries’ on his legs, his agent Mark Steinberg said in a statement shortly after the crash.

Fortunately, Woods was wearing his seat belt at the time of the crash, and this could have been an important factor in his survival.

Woods condition is said to be none life threatening. Deputy Carlos Gonzalez, said he was ‘very fortunate to be alive’.

‘He was alive, he was conscious,’ said Villanueva, adding: ‘He was not able to get up. That was not an option.’

Villanueva said he was traveling at ‘a greater speed than normal,’ adding that ‘that area has a high frequency of accidents.’

‘No skidmarks, no braking. Hit the curb, hit a tree, and there were several roll overs,’ he said.

Firefighters used a halligan tool to extricate Woods, freeing him from the car via the window..

‘He told me his name was Tiger, and at that point I immediately recognized him. He seemed lucid and calm.

‘He didn’t seem concerned about his injuries, which is common in car accidents. They may be in shock, and pain not felt until later.’

Gonzalez added: ‘He was injured. And he was successfully removed and taken to the hospital.’

‘The fact that he was stable enough to be taken to a hospital further away, which was the most appropriate one, shows he was not so severe that he needed to be taken to the nearest hospital,’ said Daryl Osby, the Los Angeles County fire chief.