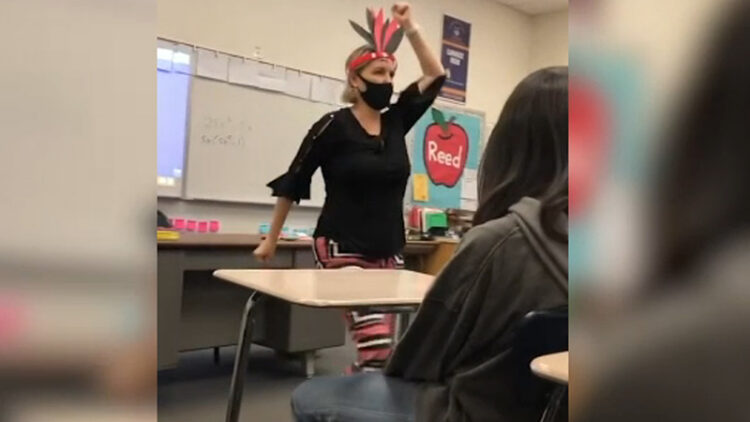 The footage which has gone viral appears to show a maths teacher attempting a ‘tomahawk chop’ while wearing a Native American headdress.

The footage shows the white teacher, with feathers on her head, war hooping and tomahawk chopping in front of her class, who are looking on in awkward silence.

According to Johnson, when the student first noticed teacher Candace Reed taking out ‘a fake feather headdress’ and putting it on, he initially thought, ‘what is she going to do?’

Reed  spent ‘several minutes’ wearing the headdress in front of the class, all while ‘war hooping & tomahawk chopping’.

According to Johnson, the pupil felt compelled to take the video as he had ‘felt  violence was being committed against him’.

Johnson  explained  that the clip  had to be shared ‘because these behaviours can no longer be swept under the rug’, adding, ‘as adults, we must stand up for our youth’.

This student has a Native first name and outwardly identifies as Native American. We need to end abuse and discrimination against indigenous youth in schools! There is no excuse for this type of behaviour. We’re not in the 1960s anymore, she should know better.

The teacher in the video has been named as maths teacher Candace Reed.It’s said Reed was giving her interpretation of a ‘tomahawk chop’ in an attempt to teach her students a mnemonic device to help remember the mathematical concepts of sine, cosine, and tangent, chanting, ‘SohCahToa’.

The footage shows the white teacher, with feathers on her head, war hooping and tomahawk chopping in front of her class, who are looking on in awkward silence.