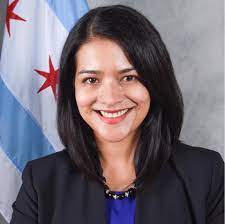 The ordinance, filed by Aldermen Silvana Tabares and Anthony Napolitano, seeks to make sure that any policy that puts city employees on no-pay status requires City Council approval.

Tabares pointed to union rights,  as being at the ehart of the matter, not the vaccine itself.

She was one of six aldermen who sent a letter to the mayor last month opposing the mandate.

The Fraternal Order of Police had a bit of a setback Wednesday in its effort to get a temporary restraining order on the city’s COVID vaccine mandate.

A hearing for the temporary restraining order was delayed Wednesday morning, and there was a motion to transfer the case, citing legal procedure.

The FOP did appear in court Wednesday afternoon to request that the judge who barred the police union head from talking about the city’s vaccine mandate on social media be removed, but their request was denied.

FOP boss John Catanzara was ordered by the sitting judge to stop talking about the mandate on social media last week.

City officials accused Catanzara of trying to encourage and illegal work stoppage, or strike, by instructing members to defy the mandate.

He said  the collective bargaining agreement assured by the union was at odds with the city’s mandate.

The FOP’s First Vice President Michael Mette compared the mandate’s requirement that officers report their vaccination status to the city to the dystopian death march of “The Hunger Games.”

“Welcome to day three of the hunger games, where we find out who the city will offer up as tribute,” he said in a video posted to Facebook. “If we fail to make them bargain with us on this issue, what issue is next?”

On Wednesday, the National Fraternal Order of Police tweeted, “The devolving situation in Chicago and the very real threat to public safety in the city has been entirely manufactured and unnecessarily escalated by @chicagosmayor. Now she is searching for a way out of this mess and insists that “contingency plans” are in place.”

The devolving situation in Chicago and the very real threat to public safety in the city has been entirely manufactured and unnecessarily escalated by @chicagosmayor. Now she is searching for a way out of this mess and insists that “contingency plans” are in place. #LightfootDuty pic.twitter.com/IROWHMazul

CPD Superintendent David Brown said less than two dozen officers have been sent home without pay for refusing. He also said the number of officers in compliance has gone up a percentage point again to more than 68% Wednesday.

Officers who refused to comply with the mandate by either refusing to upload vaccine status to the city’s online portal or who have not gotten vaccinated and won’t submit to testing were being taken off the streets and put on no-pay status, as the mandate requires.