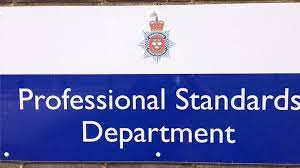 The alleged  ex rapist partner of a rape victim worked in the police professional standards, it has been revealed.

More allegations against police officers have been emerging following the revelation that serial rapist police officer David Carrick got away with his crimes for years, despite opportunities to stop him.

As further cases of sexual abuse my police officers come to light, the drive to clean up the force and root out corrupt officers and those who shield them is getting higher.

One alleged victim told Sky News she was preyed on by the officer investigating her rape case, another claims her alleged rapist ex-partner worked in professional standards – the department that would investigate predatory police officers.

According to her, he suggested coming to see her at night with a bottle of gin, and she was scared to turn him down, fearing that her case may be closed if she rejected his advances.

Amy says the unwanted advances continued for a year after the trial, and he also made them to a female witness.

Eventually, police turned up at Amy’s door, telling her that this man was being investigated for things he’d allegedly done to other women. But the damage was done.

“You just don’t trust the police anymore,” she says.

“I had to report an ex-partner for a domestic incident, and I honestly didn’t want to. I sat there and said to my sister ‘I’m not going back to the police.'”