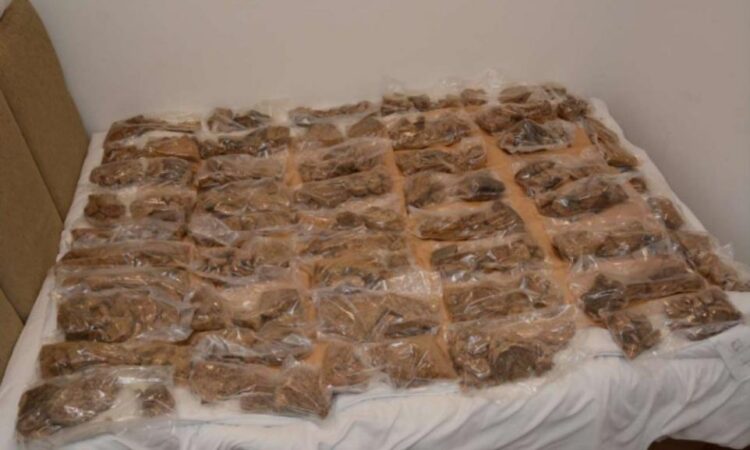 Three men have been arrested after police recovered large amounts of cocaine and MDMA worth £2 million.

West Yorkshire Police said  the drugs seized included 16.5kg of cocaine and 48kg of MDMA with a total street value in excess of £2 million.

The Class A drugs were found in the East End Park area of Leeds on Wednesday.

Police said one of the men arrested is from Leeds and the others are from Manchester, but gave no details as to whether they were tipped off, or were conducting an operation when the drugs were found.

West Yorkshire police have been conducting numerous drug operations of late, given a large inflow of drugs to the Uk in the past year, often intercepted by the special forces tied to the National Crime Agency.

Last week, cocaine worth almost £2m which was destined for the streets of Essex has been seized thanks to proactive work by our officers.

Drugs courier Kieran Grant was jailed last week Friday for eight years, admitted to officers having a large amount of drugs in his boot

The 40-year-old, of Hartington Road, in Southend, was stopped on the London-bound carriageway just before junction 8 as checks on the Skoda Fabia he was driving showed it was uninsured.

When asked  if there was anything in the car that they should be aware of, Grant immediately replied: “In the boot.”

When asked what was in the boot, he replied: “Drugs – a lot. Cocaine.”

Officers found 19 wrapped blocks of cocaine, totalling 19kg, in the boot which was being transported in two ‘bags for life’, with a wholesale value of £665,000 and a street value of about £1.9 million.

And yesterday, Border Force officers seized between 30 and 50 kilos of cannabis in checked in baggage at Heathrow airport, after U.S nationals were caught trying to smuggle a lot of cannabis into the Uk . Nine of the American citizens were charged with attempting to import class B drugs and remain in custody pending court appearances.

In November 2022, Officers from the Yorkshire and Humber Regional Organised Crime Unit (YH ROCU) assisted by West Midlands ROCU and West Mercia Police seized an estimated 200kg of Class A drugs, believed to be cocaine, worth an estimated £20 million from several vehicles in the Reddich area earlier today.

“One male arrested is from the Leeds area and the other two are from Manchester.

“Drugs seized included 16.5kg of cocaine and 48kg of MDMA with a total street value in excess of £2 million.”