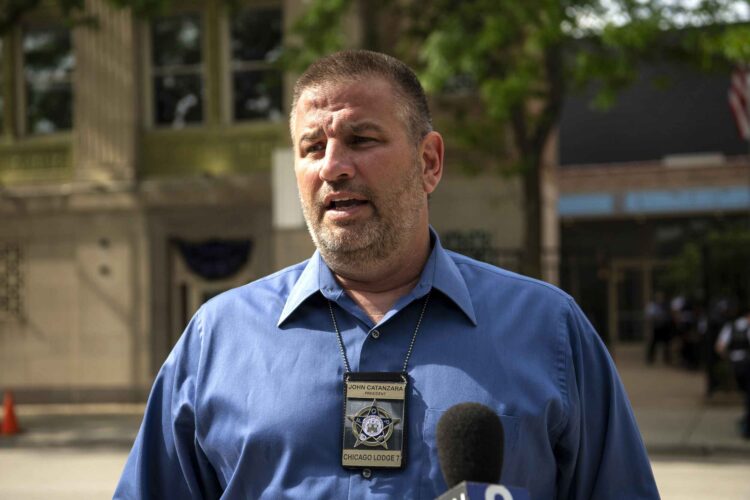 A vaccine revolt by Chicago police is heating up, after the head of the city’s largest police union urged police officers to defy a vaccine mandate.

Police Union boss, John Catanzara, urged officers to ignore a midnight deadline a few days ago, for police officers to declare their vaccination status. He told his officers ”any sergeasnt, lieutenant or Captian, who orders you to go to that portal is not valid. You are able to refuse that order”.

Several members of Chicago’s police force are now refusing to show up for work, even as the city’s crime figures rise, because of a mandate they consider bullish, to report their vaccine status.

City employees are now  being asked to show proof of vaccination or submit to bi-weekly testing, unless approved for a religious or medical exemption.

All employees in Chicago are required to be vaccinated, in the latest confrontation, equally being resisted by those who deem the mandate to be authoritarian.

During a CNN town hall on Thursday night, President Joe Biden said US emergency responders who defy vaccine mandates should be fired.

The vaccination mandate aims to protect all employees from  potential Covid-19 infections, a position that threatens the seprate reservations numerous professionals have about a vaccine produced in a short time.

Effective dialogue about the benefits of the vaccine has been up against the multiple theories circulated on social media since the beginning of the pandemic.

Adults are expected to be able to make up their minds about the effect of the materials they are exposed to, but this free choice has been seen to be problematic by authorities determined to force a level of protection they find necessary.

The forceful push for vaccination is taken on a different look in many groups who instead of considering or the benefits of being vaccinated, are now focused on the fact they are being forced to be vaccinated.

Police Union boss,  Catanzara, has compared the mandate to “Nazi Germany” and has suggested the vaccine requirements are an illegal violation of privacy.

Americans who consider vaccine mandates to be tyrannic are as many in number as those who feel those refusing vaccination are a laibility to the rest of the American population. The resistance on both sides of the equation is getting tougher.

Nearly one-third of Chicago’s almost 13,000-member police department have  refused to register their vaccination status, an expression of their preparadness for dismissal.

Twenty-one have been officially removed from active duty so far, leaving one of U.S most criminal cities understaffed in the police department.

The vaccine is considered the safest way to minimise the wide spread of Covid-19, but Chicago’s police chief insists any mandate for vaccination is illegal and without legal grounds.

This could eventually be a case for the Supreme Court, though the judges are obligated to interpret the law made by Congress.

“This virus is no different than the gunfire we take as cops,” Chicago police superintendent David Brown said on Tuesday. “I will do everything I can and I will say anything I need to in order to convince officers to do everything they can to save their lives.”

Mr Acevedo attributed the resistance to a mistrust in government. Others have expressed irritation with what they see as government overreach, as well as scepticism in the vaccines’ safety.

In Chicago, the head of the city’s largest police union John Catanzara has called on its some 11,000 members to defy the city’s requirement to report their vaccination status.

“It is the city’s clear attempt to force officers to ‘Chicken Little, the sky is falling’ into compliance,” he said last week. “Do not fall for it. Hold the line.”

Mr Catanzara, who did not respond to the BBC’s request for comment, has compared the mandate to “Nazi Germany” and has suggested the vaccine requirements are an illegal violation of privacy.

A judge last week granted the city’s request for a temporary order barring Mr Catanzara from making any public comments that encourage members of his union to resist the order. However, he has continued to post videos to the union’s public YouTube channel, in apparent defiance of the order.

Mr Catanzara said that as many as 50% of Chicago’s 13,000 officers would take unpaid leave rather than report their vaccine status – threatening to bring a public safety crisis to America’s third-largest city.