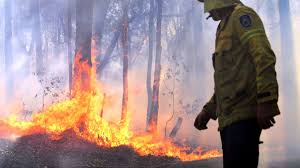 Several towns in Australia have been evacuated and hundreds of residents advised to flee  their homes for their safety  on Friday as a record number of emergency-level bush fires raged across two Australian states.

More than  80 blazes have occurred across the state on Friday putting residents in a heightened state of fear and alarm.  Gusty winds and up to 35C heat have intensified the fires, many of which are in drought-affected areas. Several residents are reportedly trapped in their homes trapped in their homes because of the  to the strength of the fires. People in several towns in Queensland  including Cooroibah and Tewantin, with a combined population of around 6,500, were told to leave by the state’s fire and emergency services.

High winds were fanning fires, turning the sky red in the mid-north coastal town of Port Macquarie.    We are hoping for the best, but this is a serious fire of  epic proportions.  We are in  uncharted territory,”  Rural Fire Service Commissioner Shane Fitzsimmons said, explaining the urgency of the situation. “We have never seen this many fires concurrently at emergency warning level.”

At one point, 17 emergency-level fires were burning simultaneously across NSW. Fire outbreaks in Australia are not new, but the extent of this one is historical in its scale.