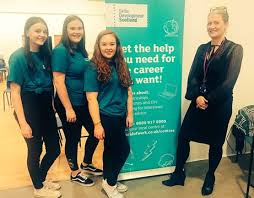 A group of senior pupils at a Scottish secondary school have chosen women’s aid as a charity they wish to bless with a £3,000 donation.

Pupils from Kirkintilloch High school   selected  Women’s Aid East Dunbartonshire, as the charity they want to support financially.  The youth and philantrophy  initiative citizenship programme is an inspiring programme for youths which empowers #generationchange to make a difference in their local communities while developing a host of skills.

YPI is one of the biggest and most successful independent initiatives being delivered in Scottish education The  move to select a charity is part of the Scottish Youth and Philanthropy Initiative (YPI) undertaken by the ambitious school . Women’s aid  is a charity organisation that champions processes aimed at helping female victims of domestic abuse. The school works in close partnership with committed parents, many of whom are involved in the strategic direction of the school.

Last year, pupils, teachers and parents from Kirkintilloch High School in East Dunbartonshire  were credited for helping launch the new ‘#Make it Count’ campaign from the Mental Health Foundation Scotland today.
The High School of an estimated  600 pupils, are building a reputation  on nurtured principles with staff provided with a lot of training to efficiently project the initiatives of the school. The decision to select women’s aid is particularly touching because of the many complex issues of domestic violence women face and the great work Women’s Aid play in trying to address them and help victims through their difficult experiences.

A spokesperson for the Kirkintilloch group told The Eye Of Media.Com: ”We are proud of our pupils and their commitment to positive initiatives.

“The initiative is designed to target secondary school pupils to raise awareness on local charities.

“If successful, we could potentially give our chosen charity £3,000 to help them help others. Women’s Aid helps women and children who have the victims of domestic abuse and give them shelter.