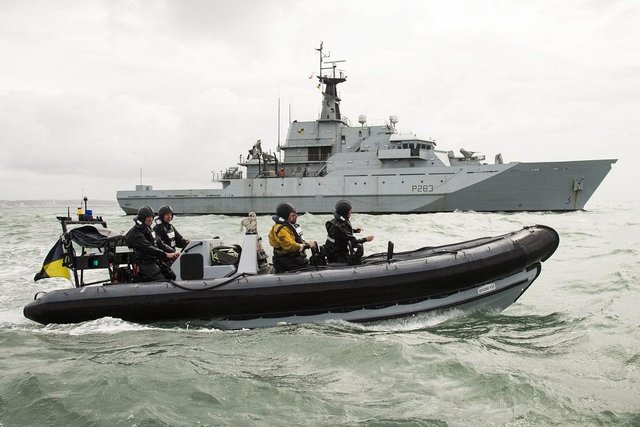 The UK will send two Royal Navy patrol vessels to monitor a protest in waters around Jersey’s main port as a fishing rights row with France gathers tension.

The drastic step follows a threat from the French government  to cut off Jersey’s electricity in a post-Brexit dispute.

The row emerged over a new licensing system for French fishing vessels. The  fire was stoked after AFP news agency reported that about 100 French fishing vessels would sail to Jersey’s port on Thursday as part of a protest against the new rules, quoting the head of fisheries for the Normandy region, Dimitri Rogoff.

PM Boris Johnson said “any blockade would be completely unjustified” as several  French fishing boats prepared to sail to the island on Thursday.

The system  which was  introduced by the Jersey government under the UK-EU Trade and Cooperation Agreement (TCA) – requires French boats to show they have a history of fishing in Jersey’s waters.

French authorities have claimed that “new technical measures” for fishing off the Channel Islands had not been communicated to the EU, rendering them “null and void”.

Mr Johnson pledged his “unwavering support” for the island, a Crown dependency 14 miles (22km) off France in the English Channel.

The threat to cut off Jersey’s electricity supply  was made by French Maritime Minister Annick Girardin, who told the French parliament on Tuesday that new rules governing access to Channel Islands waters were unacceptable – and that France was “ready to use… retaliatory measures”.

The Jersey government said fishing permits must “correspond to the previous activity a vessel has carried out in Jersey waters” under the terms of the TCA, and its new system was “in line with the data submitted by the French and EU authorities”.

A spokeswoman said it took French complaints over the terms of the licensing agreement “very seriously” and would respond, but said it had acted in “good faith” setting up the regime.

“The government remains committed to the sustainable management of Jersey waters for the benefit of this and future generations,” she said.

The two Royal Navy River Class offshore patrol vessels being sent “protect the UK’s interests at home and abroad” and are based in Portsmouth, according to the Navy’s website.

They each have a total length of 90.5m and are crewed by 45 sailors and up to 50 Royal Marines.