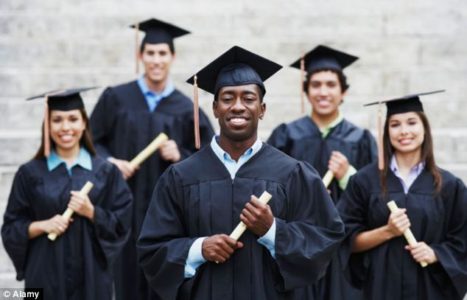 UK first class degrees may be getting easier, after official figures revealed that 26% of UK graduates achieved a first class honours last year.

The official figures from the Higher Education Statistics Agency show that the share of graduates with the highest possible result rose 44% in five years. The figures raise questions as to whether the classification system is still fit for purpose.
In 2012-13, the first year of higher fees, 18% got a first.

26% of graduates who completed their first undergraduate degree in the 2016-17 academic year achieved a first, in contrast with 18% in the 2012-13 period.

The data, published by HESA, also shows a rise in the proportion gaining an upper second (2:1) or above, with 75% of graduates making a second upper degree.

The figures show women were more likely to graduate with a first or upper second than men with a ratio of 77% compared with 72% for men. Those who studied full time were also more likely to obtain one of these results, at 76%, compared with 54% of part-time students. Instead of celebrating the news as a sign that graduates are getting better, the view is that exams are easier to perform well.

One of the reasons observed by The Eye Of Media.Com during a sampled and ongoing research, is that exam questions are getting a lot more easier to predict from past question papers. Some of our researchers discovered that questions in many universities are more or less repeated in many Universities with minor alterations in the way they are presented. This makes it easier for students to target exam topics well and prepare them effectively.

Many Universities keen to maximise the pass rate of their students, prepare similar questions on the same topics year in year out, making it easy for bright students to coast through the semester with minimal work and prepare intensely in a short period towards the last few weeks of exams.

There were also regional differences, with 75% of students at English universities gaining a first or 2:1, 78% in Scotland, 71% in Wales and 76% in Northern Ireland. Without mentioning names, Universities with weaker entry requirements are particularly guilty of this, but even some of the redbrick Universities set exam papers that are easy to predict. This has been the case for years, but exams have become easier in recent years. The higher achievement results do not detract from the ability of students, who may have become more determined in the last year, with Brexit and its unpredictable economic effects underway.

When first class degrees become more common, employers adopt a process of ‘filtering’, in which they select graduates on the basis of the class of University from which they graduated. First class graduates from Oxford or Cambridge University will usually have an edge of graduates from lesser rated Universities. Second Upper class graduates also face a rigid process of filtering, given the large numbers of graduates with a second Upper degree in the UK these days. Assessing the intellectual level of a second upper graduates these days will require an interview, since strong academics with very good structuring skills can deliver a second upper without necessarily being as developed as their degree grade would suggest.

The choice of study can also be a deciding factor, with graduates in law, Philosophy, history, English Literature, or Economics, generally reflecting a higher intellectual brain than second upper graduates who studied less challenging degree subjects. Psychology, sociology and media studies are generally rated to be less challenging than the five subjects mentioned above, but a careful assessment of those subjects show that even graduates of these subjects deserve credit for first or second upper class honours. They are not as easier as they appear, but made easier by predictable exam questions.

First class graduates surely deserve credit for their achievement, whatever subject they studied. However, when such a high percentage of students are awarded a first class degree, it makes one wonder whether Universities are giving these top grades out a little too easily. Lecturers must be trusted in their judgement to decide which papers are worthy of a first class, but if exam questions are made easy to predict, it will be difficult to tell whether the standard of examination and the academic performance of students accurately reflect the intellectual ability of the student.