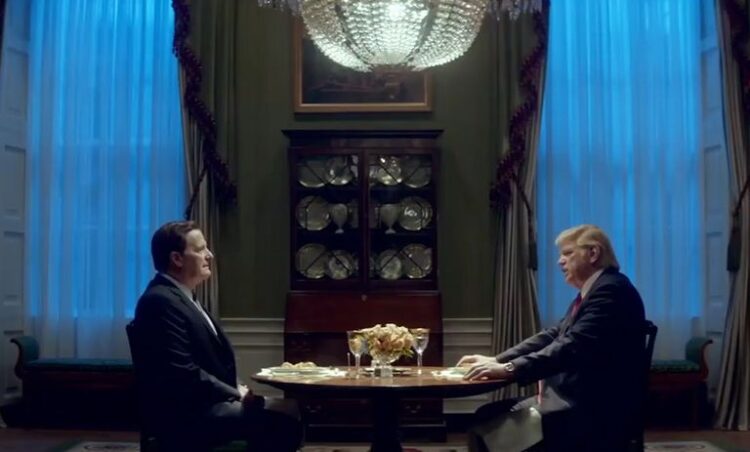 A glance at a new miniseries  to be premiered this September about  U.S President Donald Trump and former FBI Director James Comey has been released this morning.

The series which stars Brendan Gleeson as Trump, with Jeff Daniels playing the role of Comey, promises to be entertaining and successful as a television hit, insiders believe, and could become a global hit. No deal has of yet been made with a Uk broadcaster to expand its viewings there, but there are high expectations for many international broadcasters to express commercial interest in the series once its regular broadcasting in the U.S commences.

The two-part series covers the 2016 election and the immediate aftermath.Gleeson, who played Alastor ‘Mad-Eye’ Moody in the Potter films, fronts the role of President Trump as he puts on his famous blond hairstyle in the first teaser trailer for the show and declares: “I know some people in the Bureau have it in for me. But I’m the president now.”

The miniseries is based on former Director of the FBI James Comey’s 2018 autobiographical book A Higher Loyalty: Truth, Lies, and Leadership, which contains details of Comey’s career in public office and his relationship with Trump, who fired him in May 2017.

Showtime describes The Comey Rule as “an immersive, behind-the-headlines account of the historically turbulent events surrounding the 2016 presidential election and its aftermath, which divided a nation”.

The story divides the narrative between the two men “whose strikingly different personalities, ethics and loyalties put them on a collision course

The miniseries which is exploratory in nature, will cover events from Comey’s book, delving into the 2016 election and its aftermath. Both Hillary Clinton’s email probe and Trump’s Russia investigation will feature in the programme. The miniseries will begin airing on 27 September, with the second part to follow the next day.