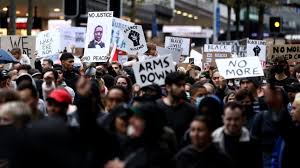 Demonstrations over the killing of George Floyd have continued in the U.S  for the eight night, despite curfews being placed by the authorities.

Today’s protests have been mainly peaceful, without much in the way of incidents to compare with the past few days.

Floyd’s relatives participated in one of the largest of the gatherings in his hometown of Houston, Texas.

The young daughter of George Floyd and her mother  appeared in public for the first time, as the protests continued to spread out of control, though generally peacefully after the series of clashes between the police and protesters that has marred the essence of these demonstrations.

The New York Police Department had arrested about 40 people as of 10 p.m. a number expected to increase.

Roxie Washington spoke at a press conference in Minneapolis of the devastating impact of the death of Floyd, an African-American who died last week after a white Minneapolis police officer pressed a knee into his neck as he pleaded for air and stopped moving. Her six-year-old daughter Gianna, stood alongside her.

“I wanted everybody to know that this is what those officers took from …” Washington said while holding back tears, her daughter looking up at her. “At the end of the day, they get to go home and be with their families. Gianna does not have a father. He will never see her grow up, graduate. He will never walk her down the aisle.”

“I’m here for my baby and I’m here for George, because I want justice for him. I want justice for him because he was good. No matter what anybody thinks,” she said. Pointing down to her.  Pointing down to her daughter, she said “And this is the proof(how  the mere existence of a daughter proves the father is good is anybody’s guess) that he was a good man”.

On the eighth day of nationwide demonstrations, Floyd’s hometown of Houston held a memorial march that drew tens of thousands of people.

Floyd’s family was in attendance, alongside the mayor, the police chief and a group of protesters on horseback, with attendees paying respects to a “gentle giant”.

The march was organised by the Houston rapper Trae Tha Truth, who was a longtime friend of Floyd’s, and Bun B, who worked with Floyd’s family for the event. “We’re gonna represent him right,” Trae Tha Truth told the crowd of several hundred gathered for the march. “We are gonna tear the system from the inside out.”

In New York City, protesters marched for hours north through Manhattan on Tuesday afternoon, waving signs during their journey.

The city has extended an 8pm to 5am curfew all week and banned much of Manhattan car traffic overnight in an attempt to better manage the the high levels of disorder that have accompanied these protests.